MANILA, Philippines – The Iglesia ni Cristo’s goal to set a new record for the biggest charity walk in the world won’t be known until later this Saturday but participants are hopeful of the results.

As of posting time, the crowd has been estimated at 96,000, more than the 77,500 recorded by Singapore which staged the New Paper Big Walk in 2000, according to Leo Matignas, a representative from auditing firm SyCip Gorres and Velayo (SGV) Co., which was monitoring the event that was held for “Yolanda” victims. 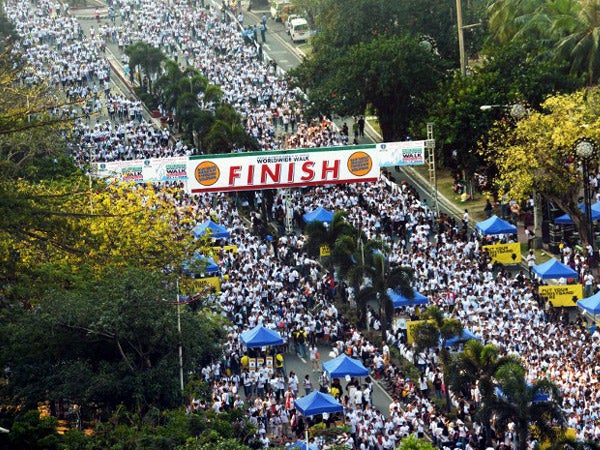 Members of the Iglesia ni Cristo (Church of Christ), a conservative Filipino Christian sect, march on a Manila street February 15, 2014 to raise funds to help millions of homeless survivors of super Typhoon Haiyan, which struck the central Philippines on November 8, 2013. The typhoon, one of the strongest to ever to hit land, left 6,200 people dead and nearly 2,000 others missing while destroying more than a million homes. AFP

But Matignas said it was an unofficial count, adding that it would be Guinness World Record adjudicator Kirstie Bennett who would determine if the Philippines had beaten Singapore.

He said the final count would be announced later in the day.

SGV was tasked to monitor a group from INC counting the wristbands dropped by participants in a box at the finish line.

Proceeds from the walkathon would go to victims of “Yolanda”, which ravaged Central Philippines and claimed over 6,000 lives.

Aside from the event on Roxas Boulevard in Manila, the walkathon was also held in 54 other provinces and 27 countries.

In a separate interview with INQUIRER.net, Superintendent Marcelino Pedrozo, deputy overall commander of the event, told INQUIRER.net that the crowd estimate has reached “almost a million”.

“If we base the count on the volume of crowd from the starting line up to the finish line, we can say that the crowd estimate is almost a million,” he said.

The organizers marked the starting line at ‎P. Ocampo street along Roxas Boulevard in Manila. The end of the line, meanwhile, is at R. Salas street.

Saying the INC organized the event “very well,” he said no injuries and petty crime incidents have been reported since the walkathon kicked off early Saturday.

“We are hopeful and positive that the INC will break the record,” he added.