Estrada reveals names of Tuason’s alleged ‘ushers’ to his office 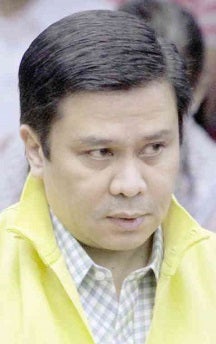 MANILA, Philippines—Senator Jose “Jinggoy” Estrada revealed on Thursday the names of the men who allegedly ushered Ruby Tuason to Estrada’s office to deliver kickbacks from his pork barrel funds.

During the Senate hearing on the pork scam on Thursday, Tuason said men from Estrada’s office helped her bring bags of money to Estrada’s Senate office in 2008. She, however, said she does not know their names.

The names were only identified when Tuason was shown photos of Estrada’s staff. Tuason pinned one Alfredo delos Reyes and a certain “Tani.”

“Hindi naman sila magtatago (They won’t hide). I will not prevent them from appearing (in the next Senate blue ribbon committee hearing),” he said after Thursday’s hearing.

Estrada, however, denied that Tuason went up to his office to bring money.

He said Tuason only brought food like sandwiches to his office.

Tuason: I’d rather die than go to jail