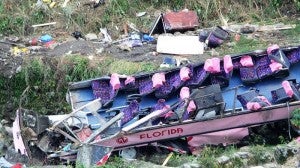 MANILA, Philippines – The Armed Forces of the Philippines Monday expressed sorrows over the death of one of the artists who conceptualized the peace mural in Camp Aguinaldo.

Andrew David Sicam, 35, was among the 14 killed in Friday’s crash of a GV Florida Transport Inc. bus in Bontoc, Mt. Province.

In recognition of Sicam’s contributions to its community relations projects, the AFP allowed his wake to be held at the multipurpose hall of the AFP Civil Relations Service (CRS) at Camp Aguinaldo.

“We wanted to honor David who is one of those who created the images of peace that can be found on the walls of the AFP headquarters. This is our simple way of recognizing the lasting contributions that he had rendered to our organization through our peace advocacies,” said 7th Civil Relations Group Commander Lieutenant Colonel Harold Cabunoc.

The AFP and the artists who painted the 4-kilometer mural would gather on Thursday to pay tribute to the fallen artist.

Cabunoc said Sicam, his wife and their two children were on their way to Bontoc along with 11 of their friends to celebrate the birthday of his youngest son when they met an accident.

Besides Sicam, comedian Arvin Jimenez, known to the public as “Tado,” and two other companions were also killed.

Sicam’s wife suffered serious injuries but was reported to be in stable condition. Their two children survived the crash unscathed.

The peace mural around Camp Aguinaldo was considered the “world’s largest.”

Search on for clues to deadly Bontoc bus crash

Read Next
Hacienda proceeds to be examined by farmers’ chosen audit firm
EDITORS' PICK
Metro Manila’s COVID-19 cases on downward trend, but surge not over — OCTA
House energy committee chair Arroyo bats for cheap electricity
Unleash the photographer in you this World Photography Day with vivo smartphones
Look Through: The fate of impounded stray dogs
Palace warns sugar hoarders after raid on Pampanga warehouse
What to watch out for when selecting a video surveillance solution
MOST READ
DOJ indicts bank officer in $2.1 billion Wirecard fiasco
Vice Ganda dismisses rumors he broke up with Ion Perez: ‘Masaya kami’
PNP bars US legislators’ visit to De Lima due to lack of authority from court
Palace warns sugar hoarders after raid on Pampanga warehouse
Don't miss out on the latest news and information.