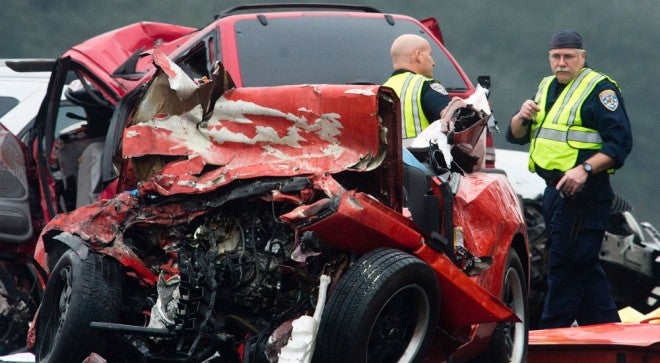 DIAMOND BAR, California – A wrong-way driver on a California freeway was arrested Sunday after being accused of causing a pre-dawn crash that left six people dead, authorities said.

Olivia Culbreath, 21, was arrested on suspicion of driving under the influence and manslaughter in connection with the crash on State Route 60 in this suburb east of Los Angeles, California Highway Patrol Officer Rodrigo Jimenez said.

“It’s horrific,” Jimenez told KABC-TV about the crash scene. Three people were ejected from their cars and the red Chevy Camaro driven by Culbreath was badly mangled.

Authorities said Culbreath was traveling east on the westbound lanes of the freeway around 4:40 a.m. when the Camaro collided head-on with a Ford Explorer. A Ford Freestyle then collided with the Explorer.

Four people were pronounced dead at the scene, and two people died after being taken to the hospital, he said.

Culbreath was in serious condition at Los Angeles County/USC Medical Center with a broken femur and a ruptured bladder, Jimenez said.

“There was evidence of alcohol consumption,” he said.