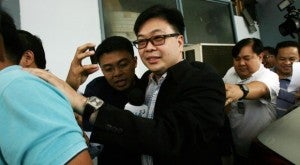 MANILA — Add “David Tan-Taba,” or David Tan-Fat, to the David Tans on the list of 17 alleged big-time smugglers who continue to receive special treatment at the Bureau of Customs (BOC).

Tan-Taba is one of three players going by the name David Tan in their operations at the BOC, according to bureau insiders. His trading group’s mis-declared and undervalued imported goods have been costing the government over P10 billion in lost revenue every year, they said.

Over the weekend, the sources showed the Philippine Daily Inquirer copies of Tan-Taba’s import papers, which showed that in the period Jan. 3-30 alone, his group facilitated the release of 1,751 container vans of various imported goods, 1,132 of which entered the country through the Port of Manila and the rest (619) through the Manila International Container Port.

The goods, the release of which were handled by four brokerage firms, were “intended for distribution to various stores of a popular Metro Manila supermarket chain,” the sources said.

Other sources, who asked not to be named for lack of authority to speak to media, identified the supermarket, the brokers and the 17 companies used as consignees of the shipments, but asked that their names not be printed.

Tan-Taba’s shipments “also included huge quantities of liquor and other alcoholic beverages, as well as cigarettes and frozen meat, but these were not listed on his group’s import papers.”

They were “misdeclared as mixed groceries, dairy products, beauty and health products, glassware, toiletries and plastic products, among other things,” the sources said, adding that Tan’s contacts at the bureau “made sure the import papers were in order.”

The two other David Tans operating at the Bureau of Customs are David Tan-Payat (-Thin) and David Tan, aka Davidson Bangayan, the alleged “Goliath” of rice smuggling who has been charged with perjury by the Senate.

Earlier, customs sources, including one newly appointed official, named some of the alleged smugglers and their consignees and brokers.

Topping the list was “Big Mama,” who brought into the country over 100 container vans between Jan. 10 and 23.

These players could influence the volume of imports handled by the BOC either by withholding shipments or bringing in more to help the agency meet its monthly collection targets, the sources said.

More shipments arrive if the smugglers and their contacts in the bureau could reach an agreement on the amount of “tara” or grease money to facilitate the release of the goods, the new BOC official said.

Last week, Agaton Teodoro Uvero, customs deputy commissioner for the Assessment and Operations Coordinating Group, said that the days of the so-called “Big 17” were numbered.

He confirmed that many of these players had been operating at the BOC for years.

“I haven’t met anyone of them, but the 17 are the popular ones here,” Uvero told reporters.

He said that “sooner or later, things will be a lot more difficult to play at the Bureau of Customs as reforms are slowly being implemented here.”

Former Customs Commissioner Ruffy Biazon said that while naming the 17 alleged smugglers was good, “it would be better if sufficient evidence was gathered against them before identifying them so it would lead to prosecution.”

“Otherwise, they will just lie low and others will take their place. It is also important to go beyond personalities and look into customs processes and procedures,” he said.

Earlier, Biazon pointed out that “commissioners come and go, but the kalakaran (way of doing things) at customs has remained the same as it has always been.”

“That’s because people always look at smuggling as the be-all and end-all of the problem. If you remove one corrupt individual and yet the same environment prevails, the risk of the replacement to go bad remains high,” he noted.