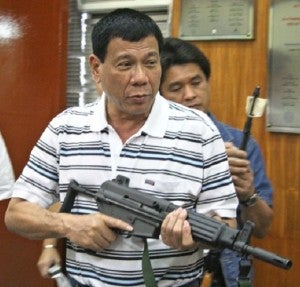 “Duterte’s threat was appalling. But equally disturbing was the lack of condemnation by lawmakers,” said Carlos Conde, Philippine researcher for HRW Asia division, after Duterte told the Senate hearing on February 3 he would kill a suspected smuggler should he catch him smuggling goods in Davao.

Conde said the lawmakers’ “tolerance” for Duterte “speaks volumes about the failure of successive Philippine governments to address the country’s problem of extrajudicial killings.”

He particularly singled out the reactions of Senator Cynthia Villar, chairperson of the Senate food and agriculture committee, who conducted the hearing.  “In Mindanao, you have to be tough because if not, there will be several abuses,” Villar was quoted as saying by Conde, who observed that the senator seemed to “express sympathy” with the way Duterte has been fighting crime in his city.

Conde also pointed out that Senator Grace Poe “expressed concern about how children might misconstrue Duterte’s threat, rather than its affront to rule of law.”

“Duterte is the embodiment of impunity in the Philippines,” Conde said.

“Legislators who ignore or, worse, seek to justify his abusive tactics not only insult the victims of such killings and their families, but also undermine efforts to bring them to an end,” he said.

He said Duterte’s comments were “no laughing matter,” because Davao’s long-time mayor has built a “track record of threatening alleged ‘hoodlums’ with deadly violence.”

“Duterte’s mayoralty coincided with the operation of “death squads” in the city that have killed hundreds of drug dealers, petty criminals and street children since 1998,” said Conde. He added that in 2001-2002, Duterte would announce the names of “criminals” on local television and radio – and some of those he named would later become death squad victims.

“No one has been successfully prosecuted for any of these murders,” Conde said. “In the meantime, the killings continue.”

HRW has repeatedly called the attention of the national government to the extrajudicial killings and the culture impunity that has been nurtured by the killings. Most of the murders have been blamed on the rule of political warlords and their private armies in the Philippine countryside.

Conde said that although the killings have considerably gone down from the time of former President Arroyo, 12 journalists were killed in 2013, bringing the total number of Filipino journalists and media workers killed to 26 since President Benigno Aquino III took office in June 2010. Of the 26 cases, police have arrested suspects in only six cases, he added.

Among those targeted for these killings were leftist activists, including environmental advocates.

“A much-vaunted initiative by the government to address impunity – the creation in 2012 of a so-called “superbody” to expedite the investigation and prosecution of cases of extrajudicial killings – remained largely inactive in 2013 even as new cases were reported by domestic human rights groups,” Conde said.