Philippine eaglet hatched in the wild 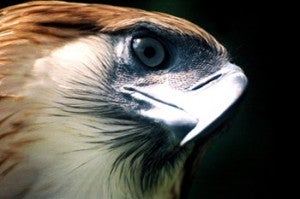 MANILA, Philippines—A Philippine eaglet has hatched in the wilds of Zamboanga del Norte, giving new hope to efforts by the Department of Environment and Natural Resources (DENR) to save the country’s flagship avian species, officials said on Friday.

In a report to Environment Secretary Ramon Paje by the “Regional Eagle Watch Team” of DENR-Region 9, the young eagle hatched on its parents’ nest atop a tree in Barangay Linay in Baliguian town in the evening of Dec. 17 last year.

The eaglet was named “Atbalin”—the fourth eaglet hatched to the same parents in the forests of Baliguian. The name given by Linay village officials is an acronym of “attraction for Barangay Linay.”

“We are very happy on hearing the news that a new Philippine eagle was hatched in the wild. This only shows that the province still has a very good forest cover, and I thank the people of Zamboanga del Norte for having taken good care of their natural resources,” Paje said in a statement.

“Atbalin’s arrival is certainly a welcome addition to the dwindling Philippine eagle population in the country,” he said.

Barangay Linay is a natural habitat of the Philippine eagle “couple” Dionisio and Milia, which breed once every two years.

Philippine eagles are monogamous and bond for life.

Parent eagles typically take care of their offspring for 22 months until the eaglet is ready to leave its parents’ territory to establish a home of its own.

Once described by American aviator Charles Lindbergh as “the world’s noblest flier,” the critically endangered Philippine eagle replaced the maya bird as the country’s national bird in 1995.

It is considered to be at high risk of extinction as its numbers diminish in the wild due to habitat destruction and poaching.

Through the Philippine Raptors Conservation Program of the Biodiversity Management Bureau (formerly Protected Areas and Wildlife Bureau), the DENR has forged partnerships with organizations such as the Philippine Eagle Foundation, University of the Philippines (UP) and Haribon Foundation for the conservation of the species.

The conservationist groups and the DENR also undertake research about the species and educate the public about the important role of the Philippine eagle in maintaining the ecological balance.

New sightings of the national bird were documented in the Cordillera mountain ranges in Apayao and Abra by the DENR-Cordillera Administrative Region. The species was also “re-discovered” in Leyte by UP scientists.

“These reports of sightings from our partner institutions offer new beacons of hope for the Philippine eagle,” Paje said.

He reiterated his call on the people to continue supporting the rehabilitation of the country’s forests through the National Greening Program to ensure the survival of the Philippine eagle.

The first sighting of the Philippine eagle was documented in 1896 in Paranas Island off Samar province. Its natural habitats, including the Northern Sierra Madre, Mt. Kitanglad, Samar Island Natural Park and Mt. Apo, have been declared protected areas.