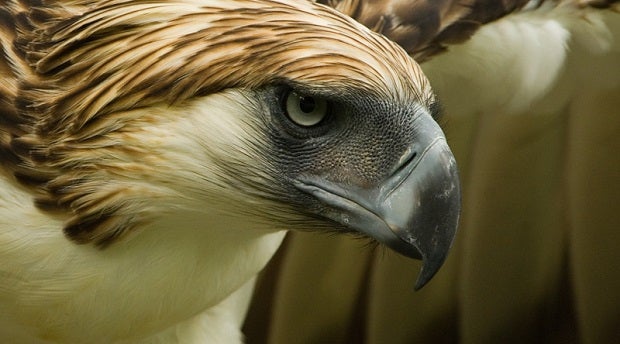 The national bird of the Philippines, the Philippine Eagle or “Haring Ibon,” was sheltered from the wrath of Yolanda by endemic rainforests in Samar. Photo by Klaus Nigge, courtesy of Haribon Foundation

MANILA, Philippines — Almost a month since Supertyphoon Yolanda (international name Haiyan) rampaged across the provinces in the Visayas, little has been heard about the status of the country’s national bird, the Philippine Eagle or “Haring Ibon,” which has habitats in Samar and Leyte.

Critically endangered, rarely seen, and facing habitat loss due to deforestation, the Philippine Eagles (Scientific name: Pithecophaga jefferyi) can only be found in four places in the Philippines: Mindanao, Samar, Leyte and in the Sierra Madre Mountains of Luzon.

The estimated remaining number of Philippine Eagles in the wild is less than 300 putting it in danger of becoming completely extinct.

Fortunately, the Philippine Eagles living in the provinces of Samar and Leyte were sheltered from the wrath of Yolanda’s winds by endemic natural rainforests, a nature and wildlife conservation group said.

“The Philippine Eagles that are native to the area are used to the stormy environment,” Biologist Kevin Carlo Artiaga of Haribon Foundation said in an exclusive interview with INQUIRER.net.

“Although this is a big storm, they have mechanisms to escape from the brunt of the storm, they hide within the interior of the forest where the wind is not that strong,” he said.

Yolanda first made landfall in Eastern Samar last November 8 bringing winds as strong as over 200 kilometers near the center. It then devastated Samar province and headed towards Leyte hitting Tacloban City first.

After leaving a trail of destruction in the two provinces, Yolanda continued across the Visayas hitting the provinces of Capiz, Iloilo, Cebu, and Palawan before exiting the country through the West Philippine Sea.

“Although Yolanda is the biggest storm to ever hit land in recorded history, its effect to the rainforests in the Philippines would not be as great as those [trees] in urban areas,” Artiaga said when asked whether the many fallen trees will likely affect the habitat of the Philippine Eagles.

“The trees in natural rainforests are native trees, they are adapted to the environment of the Philippines where storms are very frequent. These rainforests have been here for a long time,” he said.

The large number of clustered trees in rainforests also gives it strength to withstand the strong winds unlike individually standing trees in urban areas.

Despite the destruction caused by Yolanda’s powerful winds and storm surges, Artiaga said that the rainforests where the national bird of the Philippines resides in are far from coastal areas.

One of the major nature reserves in Samar is the Samar Island Natural Park, a 333,300-hectare protected area spread throughout the central portion of Samar.

It covers the areas of Catbalogan, Calbayog, Balangiga, Borongan, Llorente, and Eastern Samar, among others. The urban areas in those places were severely damaged by Yolanda.

“There is a possibility that the forest will experience disturbances because of Yolanda but it will not come to the point that there will be species that will be gone in those areas,” Artiaga said.

“In the case of the Philippine Eagle there might be some effect on young [ones], but it won’t come to the point that they will disappear,” he said.

Whatever damage Yolanda might have inflicted on the rainforests in the Visayas region, Artiaga said that “it will recover” saying that there would not be much permanent damage.

BirdLife International which collates and analyzes information on birds all over the world estimates that there could be as few as “six mating pairs in Samar, two in Leyte and probably very few in Luzon.”

Habitat loss brought by rapid deforestation was attributed as the major cause of decline in the population of Philippine Eagles, it said.

“The Philippines, the only country where this species exists, has one of the highest deforestation rates in the world. Over 90 percent of primary forest has already been lost, hindering the eagle’s survival,” The National Geographic reported in a February 2008 article.