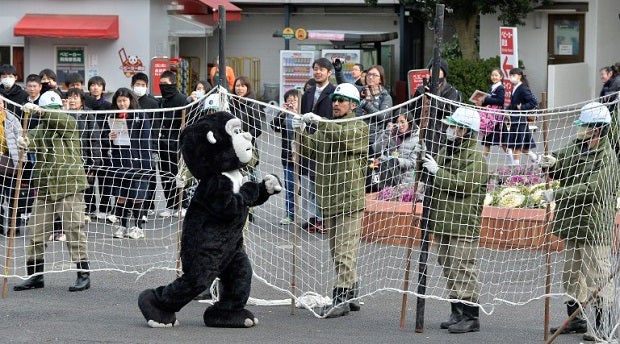 Zookeepers hold a net to capture an animal keeper dressed in a gorilla costume during a drill to practice what to do in the event of an animal escape at the Ueno zoo in Tokyo on February 6, 2014. About 70 zookeepers participated in the annual drill. AFP/KAZUHIRO NOGI

TOKYO — Staff at a Japanese zoo chased a keeper in a gorilla costume on Thursday as part of an annual escape drill to brush up their skills in the event of a real breakout.

Visitors to Ueno Zoo in Tokyo watched as the pretend primate was coralled by dozens of staff wielding nets, before being subdued with a mock stun gun and bundled onto a nearby pick-up truck.

Zookeeper Natsumi Uno, who was inside the gorilla suit, said it had been nice to be able to switch places for the day.

“In my job, we sometimes have the chance to catch an animal, but never to get caught,” she said.

“When the other keepers chased me, I could really understand the animal’s feelings.

“We need to think about people’s safety, but also about the safety of the animal we are catching. That is why this drill is important.”

Past simulations at Tokyo’s city-run zoos have featured zebras, rhinos, lions and orangutans making a break for freedom.