School records of 7,300 destroyed by ‘Yolanda’ 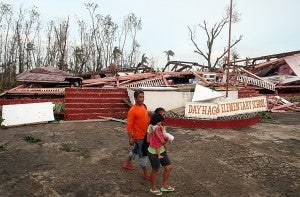 Residents walk past the rubble of Dayhagon Elementary School in Medellin, Cebu after the typhoon Yolanda. CDN FILE PHOTO

MANILA, Philippines—At least 7,300 public school students lost their school records as a result of Super Typhoon Yolanda, according to the Department of Education (DepEd).

This represents about 10 percent of the 78,000 elementary and high school students in public schools in four of the most battered DepEd divisions in Eastern Visayas (Region VIII), which bore the brunt of the killer supertyphoon last Nov. 8.

DepEd has so far found that about 17,000 student records in Tacloban and Ormoc cities and in Eastern Samar and Leyte provinces were damaged or destroyed.

Of these, 7,297 records were lost or totally destroyed during the supertyphoon, while 9,669 others were partially damaged.

The student records, contained in DepEd Form 137, is a list of student grades and student history.

He said they have so far found 41,627 of these student records to be intact.