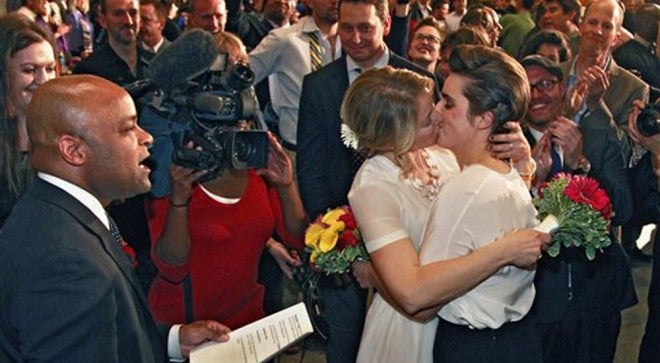 VATICAN CITY — New surveys commissioned by the Vatican show that the vast majority of Catholics in Germany and Switzerland reject church teaching on contraception, sexual morality, gay unions and divorce, findings remarkable both in their similarity and in the fact that they were even publicized.

The Vatican took the unusual step of commissioning the surveys ahead of a major meeting of bishops that Pope Francis has called for October to discuss family issues. The poll was sent last year to every national conference of bishops with a request to share it widely among Catholic institutions, parishes and individuals.

This week, German and Swiss bishops reported the results: The church’s core teachings on sexual morals, birth control, homosexuality, marriage and divorce were rejected as unrealistic and outdated by the vast majority of Catholics, who nevertheless said they were active in parish life and considered their faith vitally important.

Also surprising was the eagerness with which the bishops publicized the results. The German bishops’ conference released them simultaneously in German, Italian and English on their website, and the Swiss held a press conference.

The German church has been at the forefront of pushing boundaries on core church teachings concerning divorced and remarried Catholics, an issue Francis has said greatly pains him. It is expected to feature prominently in the October meeting.

The German bishops’ survey made clear: “The church’s statements on premarital sexual relations, on homosexuality, on those divorced and remarried and on birth control … are virtually never accepted, or are expressly rejected in the vast majority of cases.”

The Swiss bishops went further, saying the church’s very mission was being threatened by its insistence on such directives. It’s an issue Francis himself has weighed in on, decrying the church’s “obsession” with small-minded rules.

By contrast, US dioceses haven’t reported the results of their surveys in any detail. Baltimore Archbishop William Lori wrote in a recent diocesan article that more than 4,000 people had responded to his survey, but provided scant information on what they said. He wrote that “the majority of Catholics who responded said they strive to practice their faith, but acknowledged the struggles and confusion they face in doing so.”

The archdiocese of Philadelphia, meanwhile, said it was following Vatican guidelines by not publishing the findings at all.

But if independent studies are any indication, American Catholics are likely to agree with their European counterparts at least on the issue of contraception. A 2013 survey by the Pew Research Center found that three-quarters of US Catholics think the church should permit members to use birth control.

Church teaching holds that marriage is an indissoluble union between a man and woman. The Vatican opposes artificial contraception and considers homosexual acts to be “intrinsically disordered.”

The surveys found that German and Swiss Catholics rejected such teachings as out of step with their personal lives. Gay marriage is increasingly accepted, unmarried couples are increasingly the norm and the ban on artificial contraception is deemed not only unrealistic but “blatantly immoral” concerning the use of condoms to fight HIV.

Church teaching also holds that Catholics who don’t have their first marriage annulled, or declared null and void by a church tribunal, before remarrying cannot receive Communion because they are essentially living in sin and committing adultery. Such annulments are often impossible to get or can take years to process, a problem that has left generations of Catholics feeling shunned.

Last year, the German diocese of Freiburg issued a set of guidelines explaining how such remarried Catholics could get around the rule. It said if certain criteria are met — if the spouses were trying to live according to the faith and acted with laudable motivation — they could receive Communion and other sacraments of the church.

The Vatican immediately shot down the initiative, with the Vatican’s German doctrinal czar insisting there is no way around the rule.

Despite the survey findings, moral theologians warned that church doctrine isn’t about to change.

“The surveys indicate what Francis already knew and the reason why he has chosen the family for the focus of his reform,” said the Rev. Robert Gahl, a moral theologian at Rome’s Pontifical Holy Cross University.

He said the church relies on marriage and strong families to raise children in the faith. “The surveys show that the church must do much more to foster appreciation for the fidelity of such unconditional and life-giving love when society sees personal relationships in the fleeting terms of utility and gratification,” he said.