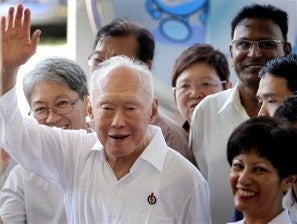 SINGAPORE — Singapore’s founding prime minister Lee Kuan Yew is recovering in hospital after suffering from an infection, the government said on Tuesday.

Lee, 90, was admitted to Singapore General Hospital on Sunday after suffering from a fever and bad cough caused by an infection, his press secretary Yeong Yoon Ying said in a statement.

“He is currently on antibiotics and recovering. He has been advised by his doctors to avoid public appearances,” she said.

She added that Lee, who remains a member of parliament after stepping down from an advisory role in the cabinet in 2011, would not attend a Lunar New Year dinner in his constituency of Tanjong Pagar on Tuesday evening due to his illness.

“He would like to wish all Tanjong Pagar residents as well as Singaporeans a Happy Chinese New Year,” she said.

Lee has maintained the tradition of attending the annual dinner with constituents in the port district for decades, but missed it for the first time last year due to health reasons.

Lee, the father of current prime minister Lee Hsien Loong, is widely credited with transforming Singapore from an economic backwater to one of Asia’s wealthiest economies.

He served as prime minister from 1959, when Singapore gained self-rule from colonial ruler Britain, until he stepped down in 1990 in favour of his deputy Goh Chok Tong, who in turn handed power to Lee Hsien Loong in 2004.

The People’s Action Party co-founded by the elder Lee has been returned to power in every election since 1959 and currently holds 80 of the 87 seats in parliament.

In a book published last year, the Asian statesman said he feels weaker by the day and wants a quick death.

The longtime fitness buff has visibly slowed since his wife of 63 years Kwa Geok Choo died in 2010.