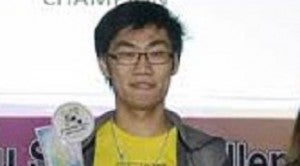 Dr. Simon Chua, president of the non-governmental organization Mathematics Trainers’ Guild-Philippines, which co-sponsored the annual competition with SM Malls, said Chan topped the finals of the Grandmaster Division of the 2014 Philippine Sudoku Super Challenge that was held on Sunday at the SM North Edsa mall.

Chan, a mainstay of the Philippine math team, placed second in last year’s edition of the contest.

Ralph Joshua Sarrosa, a BS Applied Math student at the University of the Philippines in Miag-ao, Iloilo, placed third in a repeat of his finish last year.

A total of 176 contestants, all winners of the PSSC regional contests held in SM malls nationwide and which saw over 5,000 participants, competed in the finals, according to Chua.

This year’s PSSC winners will represent the country in various international Sudoku contests in Singapore and Thailand, among other places.