In the Know: Philippine Orthopedic Center 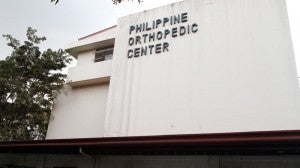 Philippine Orthopedic Center (POC), which is under the Department of Health, is the only specialized orthopedic government hospital in the country.

The 700-bed POC, located at Maria Clara corner Banawe Streets in Quezon City, caters to patients with musculoskeletal disorders and serves as a center for trauma and orthopedics.

In 2010, POC admitted around 6,500 patients and served more than 140,000 outpatients while having more than 900 personnel, a Commission on Audit report showed.

The Churchpeople Workers Solidarity, a group objecting to the Aquino administration’s approval of the POC privatization, recently warned of the effects of the project on the poor, noting that some 450 to 500 indigent patients currently avail themselves of free services in the POC outpatient department.

POC was originally known as Philippine Civil Affairs Unit No. 1, organized by the US Army in 1945 in Mandaluyong, then a town in Rizal province, to take care of civilian casualties during the liberation of Manila and nearby towns.

When the facility was turned over to the Philippine government, it functioned as a facility for accident victims and orthopedic cases.

It was then renamed Mandaluyong Emergency Hospital and later as National Orthopedic Hospital.

In 1982, it was renamed National Orthopedic Hospital-Rehabilitation Medical Center and in 1989, under Republic Act No. 6786, the hospital’s name was again changed to Philippine Orthopedic Center.—Inquirer Research

ADVERTISEMENT
Read Next
BOC: Days of ‘Big 17’ smugglers numbered
EDITORS' PICK
PH preps for China virus: Question of when, not if
Beyond water service: Maynilad builds massive infrastructure projects to clean up Metro Manila waterways
Museums ‘put to sleep,’ churches closed amid volcano’s unrest
Seventh judge assigned to handle De Lima case
SM continues to send relief assistance to remote towns in Batangas
Get exciting deals and discounts when you download the new McDonald’s App
MOST READ
Taal Volcano flexes signs of restiveness anew
Passengers from Wuhan, China to be flown out of Kalibo, Aklan – CAAP
Lacson on Duterte’s threat to end VFA over Bato’s canceled visa: Where is the connection?
Part of Aurora Boulevard in Cubao closed from Jan. 25 – Feb. 1
Don't miss out on the latest news and information.