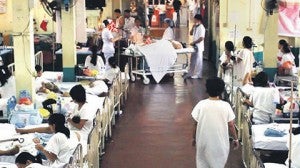 The Kilusang Mayo Uno staged a rally in front of the public hospital to press the government to junk the privatization plan.

“We chose Fabella hospital because this is where poor citizens, especially pregnant women, can enjoy free or cheap medical services,” Nenita Gonzaga, KMU Vice President for women, said in Filipino.

Gonzaga added that the government’s plan to privatize Fabella hospital could be considered sexual harassment against women.

“When the government removes the privilege of pregnant women to deliver their baby cheaply or free in a public hospital, through their privatization plan, that is considered sexual harassment against us,” Gonzaga said.

“We should move against privatization, the rich businessmen would only get richer,” said Wilson who is also the country’s main convenor for One Billion Stand for Justice.