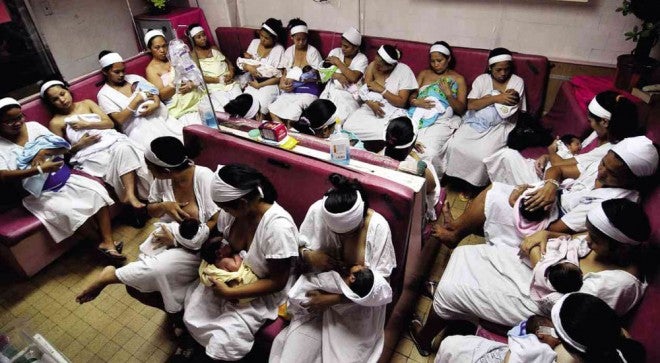 ROOMFUL OF MOMS. Newly born babies are breastfed by their mothers in a ward at Dr. Jose Fabella Memorial Hospital in Manila in this photo taken on Aug. 5 last year during the world celebration of Breastfeeding Week. RICHARD A. REYES

Time is ticking for changes in the Philippines’ “baby factory”—for better or for worse.

Aging, decrepit, grimy and dark, Dr. Jose Fabella Memorial Hospital is set to be transferred from the old Bilibid compound on Lope de Vega to the San Lazaro headquarters of the Department of Health (DOH) on Rizal Avenue a few kilometers to the north.

The prospective home will be the third time the hospital, which started as a six-bed clinic in 1920 named after the chair of the public welfare board, will move.

It will happen once Health Secretary Enrique Ona decides to implement a P743-million contract awarded to J.D. Legaspi Construction, which won the right to design and build the hospital in a bidding last year. The private contractor has filed a petition in the Makati Regional Trial Court to compel Ona to honor the deal.

When it is built—under a public-private partnership (PPP) arrangement—what is regarded as the world’s busiest maternity hospital will no doubt provide modern  delivery services in place of the less-than-decent circumstances the mostly indigent patients get now. It will also mean the poor mothers will not be able to afford the amenities.

The government says Fabella will continue to serve the poor, as only a portion of the hospital will cater to paying patients. But since a private entity is involved, profiteering will definitely come into the picture, Salvador said in a phone interview.

A privatized Fabella would result in mothers giving birth in ill-equipped public health clinics or at home, she said.

During a visit to the hospital on a sultry Tuesday morning, the Inquirer was told 51 babies were born there on Monday—half the births during the peak season late in the year. Most marriages happen either in the new year in January or in February to coincide with Valentine’s Day.

Husbands and relatives bringing plastic bags of crackers, baby diapers and alcohol, among other things, troop to the hospital, filling all the vacant seats that line the dingy walls of the hallway.

They cannot go straight to the ward. Instead, they have to go to the male nurse manning the entrance, tell him the patient’s number, and then he will call out using a microphone.

“Visitor for No. 533,” the nurse blurted on Tuesday, his voice booming inside the ward, overlaying the sound of murmuring mothers and crying babies.

One by one in the gloomy hallway, mothers in white gowns emerged to receive their visitors, usually their husbands.

“I have to be quick. My baby’s alone on the bed,” said Maricel Gantang, who gave birth to her second child on the 17th and was due to be released in a couple of days.

Gantang shared a single bed with another mother-baby pair. “We don’t mind sharing beds. I’m OK. I sleep well, it’s all a matter of positioning,” she said, half in jest.

On that day, more than 200 mothers were recuperating from childbirth, and like any other day in Fabella, the number was beyond what the hospital could accommodate. But they get by.

Marisa Calinao, 22, who just gave birth to her first baby, shared a bed with three other mothers. “This is the best we can get. We don’t have the money to pay for a more comfortable lying-in center,” she said, adding that she and her husband are both in-between jobs.

Mothers who prefer to have their own beds pay extra charges. A pay ward is air-conditioned and a curtain separates each bed. Visitors are allowed inside.

Fabella has always been the go-to maternity hospital for the poor. PhilHealth members do not have to pay a centavo, except in instances that exceed the agency’s case rate allocation. The Philippine Charity Sweepstakes Office has an office there to help indigents. Social welfare assistance is also available.

“I’m not sure how much we have to pay here but there are social workers who would certify us as poor,” said Gantang, whose husband is a tricycle driver.

In the intensive care unit, up to three babies share a bassinet.

But Fabella has been dealing with the overcrowding by implementing the Kangaroo Mother Care (KMC) program since 1999. Instead of keeping them in the crammed nursery and incubators, infants who are stable enough are placed on their mothers’ chests, skin to skin, with only their diapers on. Moms practically wear their children with the support of tube blouses.

Developed by pediatricians in Colombia in 1978, the KMC is also an innovative technique of caring for infants with low birth weight, according to Fabella’s website.

The normal wards, though cramped, allow enough sunlight and the nippy air these days is a blessing. The breeze from the large windows provides much needed ventilation.

The walls of the wards looked newly painted, livened up with borders and stamps of a known baby product logo. The dire conditions at Fabella are not new. Hence the institution has always been a beneficiary of charity projects, especially of baby care product companies.

Renovations, however, come in patches. The hallways and floors of the decades-old building are a different story.

The hallways are dark and the walls and floors are stained and grimy with age. The high ceiling affords enough air to circulate around the busy floors, but lighting is bad, giving the hospital its creepy, rundown image.

Unused side tables and incubators, wheelchairs on standby, among other things, take up some of the extra spaces.

A former nurse at Fabella said the labor and delivery rooms could barely accommodate the overwhelming number of patients. Comfort and sanitation are often sacrificed.

“I have to admit that in the labor room as many as three patients share just one bed. They go to the delivery room one by one,” she said.

“When there are too many patients, one goes almost immediately after the other, with the floor still wet after being quickly mopped up. The hurried, haphazard cleaning exposes the patient to infection. Sterile techniques are no longer observed.”

But for Gantang, Calinao and the other mothers who have just given birth at Fabella say that they’re OK in spite of the inconveniences. For them, having a baby safe and sound makes everything else sweet.