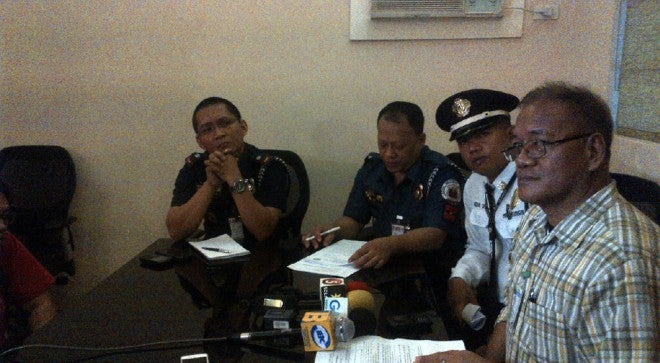 The Philippine National Police Civil Security Group with the security guard and an official of Megaforce Security Services Inc at the PNP headquarters in Quezon City. PHOTO by Nestor Corrales/INQUIRER.net

MANILA, Philippines- The Philippine National Police (PNP) on Monday said they are investigating the security agency of the condominium where the mauling of actor-host Vhong Navarro happened for failure to report the incident to police.

“We are looking into the infraction of the security agency for failure to report the incident within 24 hours,” said Major Sonny Celedio, administrative officer of the PNP Civil Security Group in a press briefing.

Celedio said the United Megaforce Security Services, which is in control of the security guards detained at the Forbeswood condominium in Taguig, should have informed the PNP of the incident citing this is a protocol security agencies should follow.

“Any form of incident requiring police assistance should be informed to us. We are a phone call away,” Celedio said.

Celedio added an initial sanction of P5,000 is being imposed on Megaforce and other violations will be filed against the agency after their investigation.

Wilfredo Molless, property manager of Megaforce, however said, they failed to immediately report the incident because the management of the condominium advised them to hold their report.

“We are subject to the desires of our client,”
Molless said.

In its official statement released this Monday, Megaforce said it is not authorized by the condominium management to release the CCTV footage, logbook and other documents being asked by authorities.

Celedio said Megaforce should have informed their client condominium of the said policy.

“They should keep their clients in the loop of this policy,” he said.