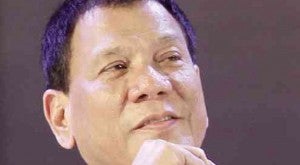 MANILA, Philippines – Davao City Mayor Rodrigo Duterte on Monday said he is willing to kill Davidson Bangayan (alias David Tan) if he is caught smuggling rice into his city.

“If this guy would go to Davao and start to unload at nakita ko na nandyan sya (I see him there)…I will gladly kill him,” the Mayor told the Senate committee on agriculture.

Duterte was replying to a question posed by Sen. Jinggoy Estrada during the hearing on what he would do if Bangayan engages in rice smuggling in Davao.

Duterte said he doesn’t mind spending the rest of his life in prison.

“Matanda na rin ako. Marami na rin akong sakit…I can do away with the stress (of being in jail) by reading books and while away my time reminiscing the lost glory,” he said.

(I am already old. I have a number of illnesses… I can do away with the stress by reading books and while away my time reminiscing the lost glory.)

Duterte said he started looking into the rice smuggling issue when Bureau of Internal Revenue (BIR) chief Kim Henares sent him a letter asking him to help address smuggling in the port of Davao City.

He said he conferred with local authorities from different agencies, as well as local rice traders, and eventually learned about David Tan.

Duterte said Tan, whose name kept cropping up in conversations about smuggling, does not even hold a business permit from the city.

“Everybody knows him. He is the central figure of rice smuggling in the country. Kung sinong may gusto mag-import they go to David Tan. Sya ang may linya sa Customs…If you want a simplified procedure you go to him,” the Davao City mayor said.

(Everybody knows him. He is the central figure of rice smuggling in the country. Whoever wants to import rice does to David Tan. He is the one who has connections in the Bureau of Customs…If you want a simplified procedure you go to him.)

During his opening speech, Duterte lamented how government officials talked too much but acted too slow and did too little.

However, Duterte said he is not trying to be a hero.