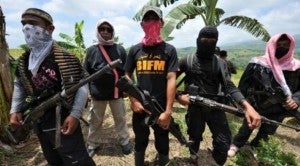 MANILA, Philippines—A week after the law enforcement operation dubbed as Operation Darkhorse began, the Armed Forces of the Philippines has planted the Philippine flag on the main stronghold of the Bangsamoro Islamic Freedom Fighters, a statement said.

The military officially terminated Operation Darkhorse, composed of AFP forces and Philippine National Police forces, Sunday morning after the AFP took over the BIFF lair in Barangay (village) Ganta, Shariff Saydona Mustapha, Maguindanao on Jan. 31 and planted the Philippine flag on the area on Feb. 1.

According to the AFP, Operation Darkhorse resulted in the neutralization of 101 known BIFF members, 52 of whom were killed and 49 wounded, and the surrender of several firearms and explosive ordnances.

On the side of the government, one soldier was killed while 20 others were wounded, while eight civilians who were caught in the crossfire were wounded.

According to the AFP, the primary concern is the safety and security of the civilians who reside in the areas where BIFF conflict remains to prevent any spillover to other communities.

The heavy fighting caused the evacuation of 9,465 families, or 35,334 individuals, from the towns of Sharif Saydona, Rajah Buayan and Datu Piang, all of Maguindanao and Pikit, North Cotabato.

“Having neutralized the BIFF threat in these areas, it is now safe for these civilians displaced by the fighting to return to their homes and go on with their daily lives,” AFP spokesman Lieutenant Colonel Raymond Zagala said.

According to Zagala, the Army’s 6th Infantry Division said at least three child rebel soldiers, aged between 15 and 16-years-old, were killed in the clashes in Maguindanao.

“Children are a zone of peace and by putting them in the forefront of armed conflict their rights are violated.”