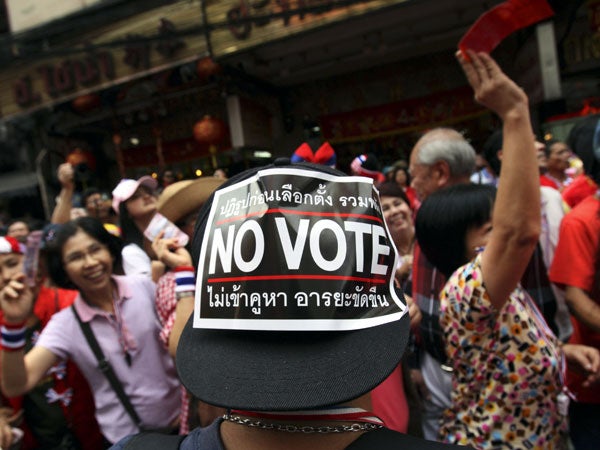 An anti-government supporter wearing a cap with a “No vote” sticker attends a march through China Town in Bangkok Saturday, Feb. 1, 2014. Thailand’s general election is scheduled for Sunday, but the main opposition Democrat Party is boycotting it, and protesters are seeking to scuttle the vote by blocking access to polling stations in Bangkok and several other places. AP

BANGKOK – Tensions were high in Bangkok on the eve of controversial elections in politically-divided Thailand Saturday as opposition protesters sought to block ballot boxes being distributed in several parts of the country.

Thailand is gearing up to stage touchpaper polls on Sunday despite a boycott by the main opposition party and disruption from demonstrators bent on preventing the likely re-election of Prime Minister Yingluck Shinawatra.

Scores of protesters laid siege to a ballot box distribution center in Bangkok, which has seen weeks of rallies by a loose coalition opposed to Yingluck and the enduring influence of her brother Thaksin Shinawatra — a former premier ousted by the military in 2006.

Police sought to separate the demonstrators from a group of some 200 government supporters, some armed with sticks and metal bars, as tensions rose in the capital which has seen several outbreaks of violence since the protests began.

“The government is corrupt. If we let the vote go on then they will come back, so we should not hold the election,” said opposition protester Sirames, who gave only one name, at the Lak Si district office in northern Bangkok — one of 50 in the capital.

He said the group planned to block roads around the building until voting ends on Sunday afternoon.

Protesters — mainly the Bangkok middle classes and southerners, backed by factions in the elite — are demanding Yingluck’s elected government step down to make way for an unelected “people’s council” that would oversee loosely defined reforms to tackle corruption and alleged vote-buying.

The unrest is the latest round of political instability to hit Thailand since royalist generals ousted Thaksin seven years ago, unleashing a cycle of occasionally violent rival street protests.

At least 10 people have been killed and hundreds injured in clashes, grenade attacks and drive-by shootings since mass opposition rallies against her government began three months ago.

Observers are predicting a chaotic election after advance voting was blocked in several parts of the capital last Sunday.

“I can reassure all of you that going out to vote will be orderly and safe,” said Department of Special Investigation chief Tarit Pengdith in a televised address.

The backdrop to the protests is a years-long political struggle pitting the kingdom’s royalist establishment — backed by the courts and the military — against Thaksin, a billionaire tycoon-turned-politician.

But uncertainty hangs over the results, with several constituencies without a candidate.

Some 440,000 people prevented from casting ballots last week are due to vote on February 23.