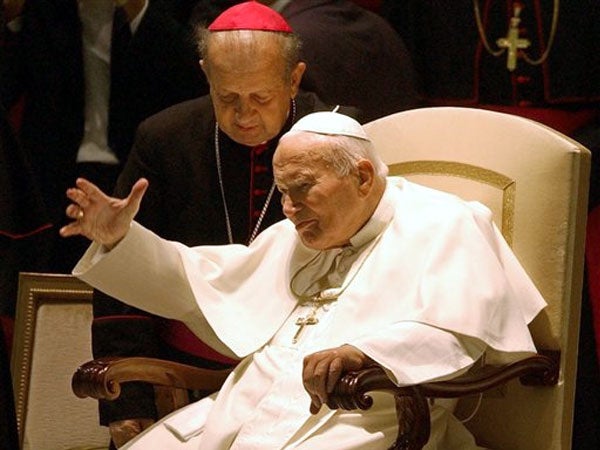 Pope John Paul II with Archbishop Stanislaw Dziwisz as he arrives in the Paul VI hall to hear a “Message from the College of Cardinals to the Holy Father” at the Vatican. AP

ROME—Italian police have recovered part of a religious relic stained with Polish pope John Paul II’s blood that was thrown away by thieves thinking it was worthless, the Italian press reported on Saturday.

The relic was snatched a week ago along with a cross from a small church in Italy’s central region of Abruzzo, sparking a region-wide search with police and sniffer dogs.

The three robbers, unaware that the small piece of framed cloth was valuable, threw it away in parts but could not remember where.

The relic consisted of a metal frame around a piece of blood-stained cloth, believed to be part of the robe the pontiff was wearing when he was shot in an assassination attempt in St Peter’s Square in 1981.

The metal frame was recovered shortly after the robbery and on Saturday the Italian press said the golden-threaded cloth, albeit damaged, was found in a garage.

The loot was snatched from the San Pietro della Ienca church in the mountainous Abruzzo region in central Italy where the late pope loved to go on skiing holidays.

The relic was given to the small church in 2011 by Stanislaw Dziwisz, a cardinal who served as John Paul II’s personal secretary until his death in 2005.

Following the robbery, some 50 police officers and sniffer dogs were deployed in the search for the missing relic in an area famed for its weathered stone houses and the little church where the head of the Roman Catholic Church once reportedly took refuge in a storm.

John Paul II and the Italian pope John XXIII, known as “Good Pope John”, are set to become saints in a ceremony at the Vatican in April — an event which will substantially increase the value of the stolen relic.

Read Next
Portions of Roxas Boulevard to be closed until Feb 14
EDITORS' PICK
Do all the things you do, faster
Motorcycles, smartphones, and cash prizes up for grabs in TNT’s ‘Tuloy Ang Saya’ Raffle in Mindanao
House energy committee chair Arroyo bats for cheap electricity
NCR at increased COVID risk again
New PS-DBM director says DepEd laptop MOA ‘not legal’
House okays budget; ways to go in Senate
MOST READ
Shopee PH gets flak for getting Toni Gonzaga
Robredo’s tarpaulin portrait at Palace just a ‘placeholder’
Robredo supporter tackles elephant in room: No massive fraud in 2022 polls, surveys were just right
DepEd: We are in a crisis situation in education sector
Don't miss out on the latest news and information.