Buddhists in PH: Beyond ‘tikoy,’ fireworks and New Year revelry 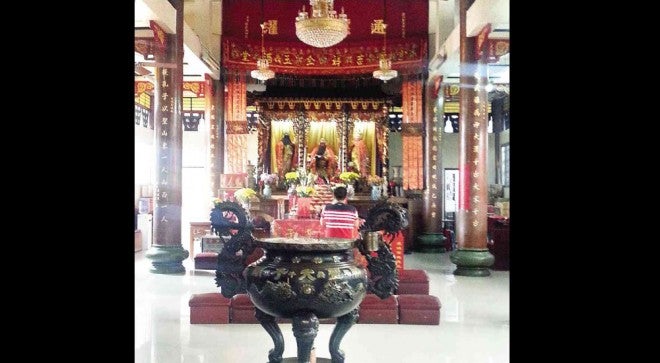 Dragon dance, fireworks and “tikoy”—just some of the things that give the Chinese New Year a multicultural appeal.

It is a time to reflect on one’s present and “past lives,” identify and rectify mistakes, and renew one’s capacity for “unconditional love,” according to Ericson Go Giap, a cancer survivor who now devotes long hours to volunteer work for a foundation rooted in Buddhist teachings.

Giap is a member of a community that makes up a tiny segment of Philippine society but whose holiday based on the Chinese zodiac is warmly embraced and savored by the vast majority.

The travel website buddhist-tourism.com said they make up 2 percent of the country’s population, but a 2010 census by the National Statistics Office counted only around 46,500 Buddhists living in the predominantly Catholic nation, representing a mere 0.05 percent.

Many converge at the Seng Guan Temple on Narra Street in Binondo, Manila, the most frequented Buddhist place of worship in the country, to mark the Chinese New Year, filling it with prayers and smoke from burning incense. Binondo also hosts Guan Sheng Fu Zi Temple, which was established in 1882, making it the oldest in the country.

The worshippers include pure-blooded Chinese like Giap, 38, who was born in the Philippines to parents from Fujian, China.

“We pray for the coming year to be smooth, and we also reflect on our mistakes in the past year,” Giap told the Inquirer in an interview Tuesday.

People offering flowers and fruits start flocking to the temple around 10 p.m. on New Year’s Eve, according to the Seng Guan Temple administrator, Alfonso Lim.

In the past, only Chinese Buddhists were allowed to enter, but now the temple is also open to those of other faiths who need a place for prayer and reflection. It is not uncommon to see young students spending a few quiet minutes inside, Lim said.

“Buddha taught us that everybody has a Buddha nature so we are not limiting this temple only to Buddhists; we are opening it to all,” he said.

As a way of life, Buddhism promotes charity, compassion and a world view that regards everyone as  equals, with no one above anybody, said the 60-year-old Lim. One need not attain positions of power and influence or engage in politics to achieve these ends, for “Buddhists believe that we should not meddle in the affairs of the government.”

“We always make it a point to think before we speak because whatever we say will have an impact on our lives and on the lives of other people,” Lim said, pointing to the Buddhist precepts inscribed on the temple’s walls.

One of the teachings reads: “When a friend makes mistakes, do not forget all the good things he did for you.”

“We must learn to accept it when we are wrong. This is not about giving up but growing up,” the temple guardian said.

Patience is highly held as a virtue. Giap smiled as he shared an example: “With the terrible traffic situation here (in Metro Manila), we always try to remember Buddha’s teaching that no one can make you angry unless you are really willing to be angry.”

And speaking of government, “corrupt or not, you will have to deal with the effects of karma,” he said.

On a more personal note, Giap said the Buddhist path became his source of strength in facing a deep crisis. “I have undergone three major surgeries after I was diagnosed with a brain tumor in 2009, but it did not sow hatred in my heart. I knew I had to take that life challenge because it was given to me,” Giap said.

Instead of looking for anyone or anything to blame for his condition, he chose to rise above it and channel his energy working for others.

He found a vessel in the Tzu Chi Foundation, a nonprofit organization that started in Taiwan and has been active in the country since 1994.

“Through this organization, we Buddhists are able to promote humanitarian service, love and compassion for the needy,” said Giap, who also lends his skill as a graphic designer for Tzu Chi projects.

The foundation, whose activities range from holding medical missions to organizing volunteer firefighters, launched a massive aid program for survivors of Supertyphoon “Yolanda” in the Visayas last year. This included a “cash-for-work” project that benefited tens of thousands in the devastated communities.

Ushering in the Chinese New Year is always a colorful albeit one-day affair both for Filipinos and local Chinese. But for Giap, Lim and the rest of the “0.05 percent,” it starts another cycle, another challenge, to share and nurture the Buddha  in everyone.