Thailand to proceed with troubled election 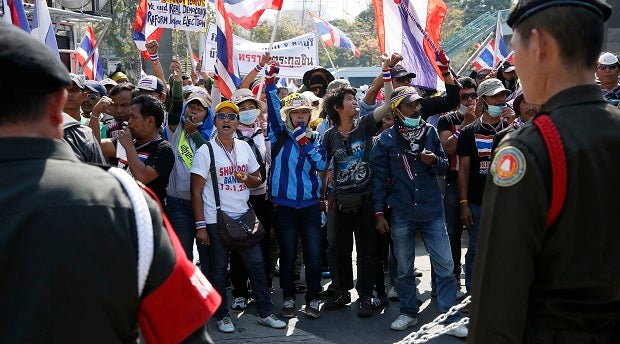 Thai soldiers stand in front of anti-government protesters during a rally during the cabinet meeting at the Army Club Tuesday, Jan. 28, 2014 in Bangkok, Thailand. Thai Prime Minister, Yingluck Shinawatra, met Tuesday with the country’s polling body to discuss the possibility of postponing a general election set for this weekend, even as protesters tried to disrupt the talks and a shooting took place nearby. AP/Wally Santana

BANGKOK — Thailand’s government vowed Tuesday to push ahead with controversial elections this weekend, despite threats by opposition protesters to disrupt the polls in an attempt to stop the ruling party returning to power.

The announcement came after talks between Prime Minister Yingluck Shinawatra and election officials who urged a delay following street violence in which at least 10 people have been killed and hundreds injured in grenade attacks, drive-by shootings and clashes.

In the latest incident, shots were fired Tuesday near the Bangkok army base where Yingluck was holding meetings, as hundreds of protesters massed outside.

Emergency services said two people were injured although the exact circumstances were not immediately clear.

The Thai capital has been shaken by nearly three months of mass street demonstrations, demanding Yingluck’s elected government step down to make way for an unelected “people’s council” that would oversee reforms aimed at curbing the dominance of her billionaire family.

The Election Commission proposed during Tuesday’s talks to postpone the election for 120 days, but after discussions it agreed with the government to press ahead with the February 2 vote, deputy government spokesman Chalitrat Chantarubeksa told reporters.

The main opposition Democrat Party is boycotting Sunday’s polls, saying reforms are needed to ensure the vote is truly democratic and to prevent abuse of power by the next government.

Protesters threaten to ‘close every route’

Advance voting over the weekend was marred by widespread disruption by opposition protesters who besieged polling stations and stopped hundreds of thousands from casting ballots.

Protest leader Suthep Thaugsuban has threatened to “close every route” to polling stations again for the main election, raising fears of further violence.

An anti-government rally leader was shot dead on Sunday while giving a speech from the back of a pickup truck in a Bangkok suburb, during the campaign by demonstrators to block advance voting.

In another apparently politically related killing, the body of a man wearing a wristband popular among protesters was found Tuesday near a rally site with several bullet wounds, according to police, although the circumstances of his death were unclear.

“He could be a protester or someone who infiltrated the demonstrators,” said Police Colonel Charoen Srisasalak.

Yingluck’s meeting with the election authorities came after the Constitutional Court last Friday ruled that the polls could legally be pushed back because of the civil strife.

The government notes that under the constitution an election should normally be held no more than 60 days after the dissolution of parliament, which happened in early December.

The opposition argues that an election without reforms will not resolve the long-running political conflict.

The kingdom has been bitterly divided since Yingluck’s older brother, the then-prime minister Thaksin Shinawatra, was overthrown by royalist generals in a coup more than seven years ago.

Critics accuse the billionaire tycoon-turned-politician of controlling his sister’s government from Dubai, where he lives to avoid prison for a corruption conviction.

The protesters have staged a self-styled “shutdown” of Bangkok since January 13, occupying several main intersections, although attendance has gradually dwindled and disruption has been limited.

The government has declared a 60-day state of emergency in the capital and surrounding areas, giving authorities the power to ban public gatherings of more than five people, although they have not yet done so and demonstrators have vowed to defy the decree.