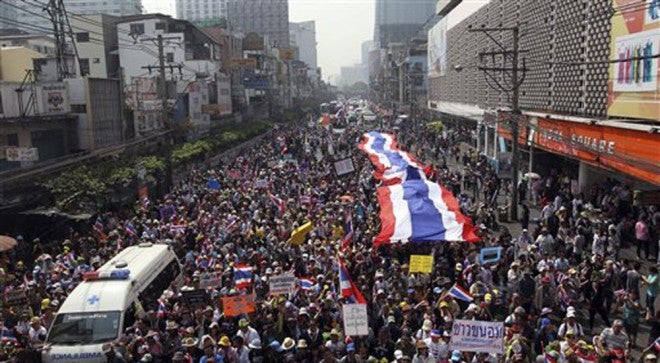 Thai anti-government protesters take to a street with a giant national flag during a march in Bangkok, Thailand Saturday, Jan. 25, 2014. Thailand’s ruling party has questioned the reasoning behind a court decision allowing next month’s general election to be postponed, but held open the possibility that it might agree to put off the polls if its political rivals agree to recognize the legitimacy of a new vote. AP

The chaos was the latest blow to Prime Minister Yingluck’s embattled government, which called the Feb. 2 vote in a failed bid to ease months of street protests that have thrown the nation into crisis.

The outcome of Sunday’s balloting is seen as a harbinger for the main poll, which the Election Commission and protesters demanding Yingluck’s ouster want postponed.

Although disruptions are expected only at up to 50 electoral venues in Bangkok and the opposition stronghold in southern Thailand, voting Sunday is likely to go ahead unhindered in the majority of the country. About 49 million of Thailand’s 64 million people are eligible to cast ballots, and 2.16 million of them applied for advance voting.

Protesters waving the Thai flag blocked electoral officials and ballot boxes from getting inside voting stations, and electoral officials closed several as a result. Police took no action to disperse the crowds, following longstanding orders from Yingluck to avert violence for fear of triggering a military coup that could depose her government.

Suthida Sungkhapunthu, a 28-year-old office worker, turned back from one polling station after reading news of the day’s mayhem on her phone.

“I saw this coming but I’m still quite disappointed,” she said, denouncing the protesters as “undemocratic” as she watched the mob at her polling station a block away. “It’s my constitutional right” to vote.

The protesters, led by former lawmaker Suthep Thaugsuban, are pushing for Yingluck’s government to be replaced by a non-elected ‘people’s council’ that would implement anti-corruption reforms before a new vote can take place. They accuse Yingluck’s government of carrying on the practices of her billionaire brother Thaksin Shinawatra, a former prime minister they allege used the family fortune and state funds to influence voters and subvert democracy.

Thaksin was ousted in a military coup in 2006 after street protests accusing him of corruption and abuse of power. The coup triggered a sometimes-violent and still active struggle for power between Thaksin’s supporters and opponents. He fled into exile in 2008 to avoid a two-year prison sentence for a conflict of interest.

Yingluck has faced months of street protests, which intensified this month with demonstrators taking over key intersections and trying to shut down government offices to prevent civil servants from working.

There are increasing doubts the Feb. 2 poll will take place, and the ruling party suggested over the weekend that it was willing to postpone the poll — but only if protests end and the main opposition party abandons its boycott.

There has been no sign yet that Yingluck’s rivals would agree, although Yingluck and the Election Commission are expected to meet Tuesday to discuss a possible delay.

Even if the Feb. 2 vote goes ahead, the crisis will continue. Protesters blocked registration in some districts last month, and not all legislative seats will be filled. Parliament is therefore unlikely to achieve the quorum it needs to convene, which would prevent a new government from being formed.

On Friday, the Constitutional Court ruled that the government, in agreement with the Election Commission, could postpone the polls. But Yingluck’s Pheu Thai party questioned the legal basis for the ruling.

One official, Thanin Boonsuwan, suggested that the court’s ruling did not meet conditions set down by law or precedent.

The government this week imposed a state of emergency in Bangkok and surrounding areas after a spate of protest-related violence. The measure allows suspension of many civil liberties. The protesters say they will ignore any measures imposed by the decree, which is valid for 60 days.