US ship heads out to destroy Syrian chemical weapons 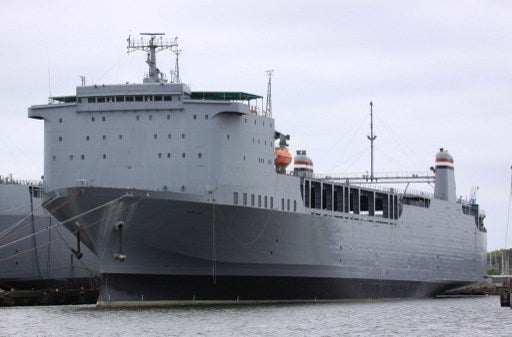 WASHINGTON – A specially-equipped US naval ship departed for Italy on Monday on a ground-breaking mission to destroy Syria’s most dangerous chemical agents, Pentagon officials said.

Setting off from the port of Norfolk on the Virginia coast, the MV Cape Ray is due to arrive in the southern port of Gioia Tauro in about “two to three weeks,” spokesman Colonel Steven Warren told reporters.

Defense Secretary Chuck Hagel sent a letter to Captain Rick Jordan and the 135-member crew telling them they were embarking on a “historic mission.”

“You are about to accomplish something no one has tried,” Hagel wrote in the letter released by the Defense Department.

“You will be destroying at sea one of the world’s largest stockpiles of chemical weapons and helping make a safer world,” he wrote.

The Cape Ray was initially supposed to head out earlier on Monday but engine problems delayed the scheduled departure, officials said.

The ship has a crew of 35 civilians operating the vessel and will have a 63-member team in charge of the hydrolysis units as well as a security force on board.

The hydrolysis machines will mix heated water and other chemicals to break down the lethal agents, resulting in a sludge equivalent to industrial toxic waste.

The agreement was brokered as a way to avert US missile strikes that Washington threatened after a chemical attack near Damascus, which Washington and other Western governments blamed on the regime.

Under the accord, Syria’s entire chemical arsenal is to be eliminated by June 30.

The arrangement will see some of the most dangerous agents neutralized on the US ship at sea, as no country was ready to host an operation to destroy the chemicals.

The chemicals will be loaded on to the Cape Ray at the Italian port and then taken to an undisclosed location for destruction.

The materials are the deadliest in Syria’s 1,290-ton declared arsenal and include mustard gas and the ingredients for the nerve agents sarin and VX.

The destruction of the chemicals could take between 45 to 90 days, according to the Pentagon.