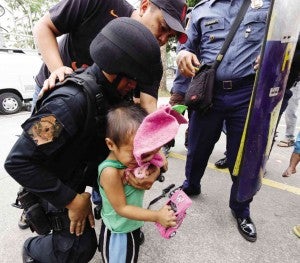 POLICEMEN wipe with a wet towel the face of a child overcome by smoke from a tear gas canister during yesterday’s demolition of shanties on Agham Road in Quezon City. Alexis Corpuz

During investigation, however, it was discovered that two of those arrested did not even live in the area but were from Barangay 128 in Caloocan City.

Before the clash between personnel of the QCPD Civil Disturbance Management (CDM) unit and residents of the disputed property in Sitio San Roque, Barangay Bagong Pag-asa, the latter had started setting up barricades and making “weapons,” including plastic bags containing human waste, as early as 5 a.m.

When five trucks ferrying members of the demolition team from the city’s Task Force for the Control, Prevention and Removal of Illegal Structures and Squatting and antiriot policemen arrived at 9 a.m. to tear down around 120 shanties, trouble broke out.

Residents in the area started hurling stones, bottles and pillboxes at the demolition teams and policemen trying to break through the barricades they had set up. Members of the CDM, in turn, threw tear gas canisters to drive them back.

The choking smoke from the canisters, however, made the residents fall back, allowing the demolition team to begin their task. Nobody was reported hurt in the incident.

Quezon City administrator Aldrin Cuña said that the demolition was conducted upon the request of the NHA and that due process was observed with the affected families informed of the impending operations.

He said that legitimate residents in the area were entitled to P5,000 worth of financial assistance plus relocation to a site in San Jose del Monte, Bulacan.

The property that the informal settlers had been occupying for years has been tagged for development as part of the Quezon City Central Business District, a private-public partnership with Ayala Land Inc.

PO3 Modestino Juanson of the QCPD-CIDU told the Inquirer that of the 11 men picked up by operatives of the QCPD Masambong station, two were residents of Caloocan City, not Barangay Bagong Pag-asa. They were identified as 18-year-old Richard Chiong and Carlito Estopia.

In July last year, residents in the area managed to prevent their houses from being demolished by setting up barricades. Their sheer number prompted a small contingent of policemen to back down.