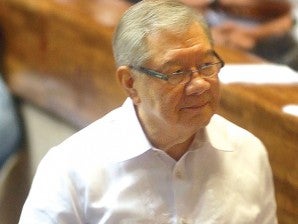 MANILA, Philippines—Impeaching Supreme Court justices is out of the question for Speaker Feliciano Belmonte, who rejected calls for such a move by some of his colleagues, saying there were more pressing matters for the House of Representatives to tackle.

“This is a time [when] we must focus on the many concerns confronting our people. It is not a time for more impeachment bids that sacrifice vital legislation that need our urgent attention,” Belmonte said in a statement.

“Apart from measures that need to be passed there are other more vital issues that should be addressed like our rehabilitation efforts [after] ‘Yolanda,’ as well as peace, social services and other issues. I am sure our people see this as more urgent than gathering signatures for impeachment complaints and the time and expense this process involves,” he added.

According to him, he respects his colleagues’ view on impeachment, but the “greater interest” of the people should come first.

“My view is that it is a time for government to unify towards these goals that forward progress and development and set aside differences that hinder us from moving ahead,” he said.

Oriental Mindoro Rep. Reynaldo Umali earlier said he was bent on filing an impeachment complaint against several Supreme Court justices for their supposedly “flip-flopping” decisions involving the disqualification of a colleague, in relation to the jurisdiction of the House of Representatives Electoral Tribunal, and the scrapping of Congress’ Priority Development Assistance Fund.

The Speaker said the House was focused on several priority measures such as the amendment of the Bangko Sentral ng Pilipinas charter, the improvement of the witness protection program, the national land use policy and the amendments to the Fisheries Code.

He said he was intent on pushing his proposal to amend the economic provisions of the Constitution to allow Congress to pass laws that would lift restrictions on foreign participation in certain industries.