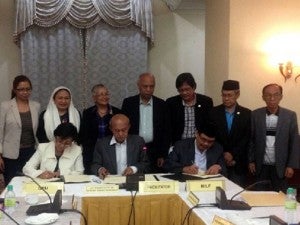 “What’s happening inside right now is they are able to agree on the remaining contentious, sensitive points in the annex. I would assume they are now reviewing and editing the document, the formatting and all that,” Yasmin Busran-Lao, government panel member, told reporters.

The Comprehensive Agreement on the Bangsamoro (CAB) will be signed in Manila soon after the normalization annex is completed on Saturday.

“There has to be a balance between goodwill and security,” one of the sources explained.

The government will have to redeploy its troops out of what would be the Bangsamoro political entity, which will replace the Autonomous Region in Muslim Mindanao (ARMM), in exchange for the MILF’s decommissioning of its firearms.

He explained that a third party decommissioning team would be the one responsible for the decommissioned firearms.