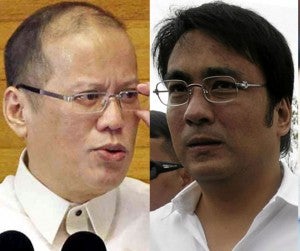 “Only the part where he mentioned my older sister again and my brother-in-law,” the President said when asked by reporters how Revilla’s privilege speech on Monday affected him.

“More than anything, it had an effect on me, I wish I were a senator and I was there, and I would tell him, ‘Can you entertain a few questions?’” the President said, visibly annoyed.

In his speech in which he denied allegations he channeled P500 million in his pork barrel funds to ghost projects,  Revilla raised a host of issues against the President’s reformist program “daang matuwid (straight path).”

Revilla mentioned reports implicating the President’s older sister, Ballsy, and her husband, Eldon Cruz, in an alleged $30-million extortion attempt from a Czech-train manufacturer for a Metro Rail Transit contract.

The actor-turned-politician said Aquino should know how painful it was to have a relative implicated in controversies.

Revilla said his son had to drop out of law school because he had been bullied after the father was dragged into the alleged diversion of P10 billion in Priority Development Assistance Fund (PDAF) to bogus foundations controlled by detained businesswoman Janet Lim-Napoles.

“The warranted defense is, this is all politics,” Aquino said.

But the Chief Executive said that if it were just politics, his administration could have used the revelations of the scam whistle-blowers led by Benhur Luy to destroy the opposition during the 2013 midterm elections.

“The real story is the family of Luy complained of illegal detention to the NBI (National Bureau of Investigation),” the President said.

He added that Justice Secretary Leila de Lima gave him information on Luy’s claims in mid-March at the height of the campaign.

The President said the administration “refrained from using” the pork barrel scam investigation against the opposition.

“Let’s do the proper process and gather evidence to back it up,” Aquino said he told De Lima. “And then now, they’ll say it’s all politics?” the President said. He pointed out that Revilla allegedly had 22 PDAF dealings with Napoles.