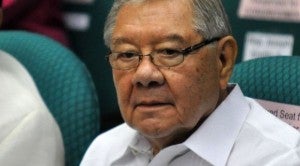 MANILA, Philippines – Pressed for time by a majority leader’s view that Charter change is dead, Speaker Feliciano Belmonte said he would rather focus on amending the economic provisions of the Constitution than in pushing for the freedom of information (FOI) bill.

“Yes, because I’d like to tackle Charter change now because people are saying we don’t have time,” Belmonte said when asked if he would prioritize Charter change before FOI bill.

This despite an earlier vow by the Speaker that he would make sure the FOI bill passes under his term.

Belmonte made the statement after Majority Leader Neptali Gonzales II pronounced charter change as dead in the chamber due to lack of time.

Gonzales had said amending the Constitution becomes more difficult as the elections near due to the public’s view that Charter change only becomes a ploy for term extension.

“If this were the last session and half of the session is over, talagang wala nang time. But we’re only in the first session,” Belmonte said in defending his measure.

“When will we ever have time if we don’t do it on the first session?” he added.

Belmonte, however, assured that there is still “plenty of time” for the FOI, the proposed measure intended to promote transparency in government.

He also said he would be knocking on the doors of representatives to make sure his resolution amending the Constitution’s economic provisions be passed without any insertions on a change in government and term limits.

His resolution would need a law passed by Congress to lift foreign restrictions on the economy, the country’s “stumbling block” to rake in more foreign direct investments, Belmonte said.

Charter change has been unsuccessful in previous Congress due to contentious provisions on changing the system of government. The FOI bill, meanwhile, remained languishing in the committee level pending a discussion on its provisions.

Charter change may be way for lawmakers to regain pork barrel