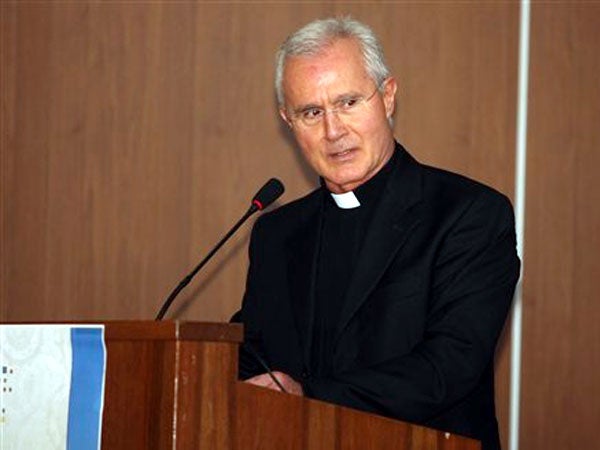 VATICAN CITY— A Vatican monsignor already on trial for allegedly plotting to smuggle 20 million euros ($26 million) from Switzerland to Italy was ordered arrested in a separate case on Tuesday for allegedly using his Vatican bank accounts to launder money.

The financial police in the southern city of Salerno said Monsignor Nunzio Scarano’s accounts had been used to transfer millions of euros (dollars) in fictitious donations from offshore companies. Police said millions have been seized and that other arrest warrants were issued.

Scarano’s lawyer, Silverio Sica, said his client merely took donations from people he thought were acting in good faith to fund a home for the terminally ill. He conceded that the money ended up being used to pay off Scarano’s mortgage, however.

“We continue to strongly maintain the good faith of Don Nunzio Scarano and his absolute certainty that the money came from legitimate donations,” Sica told The Associated Press.

The Salerno investigation was already underway when Scarano was arrested in June in Rome on separate accusations that he had plotted, along with a financier and carabinieri officer, to secretly transport 20 million euros in a private jet from Switzerland to avoid paying customs duties. Sica has said Scarano in that case was merely acting as a middleman.

Scarano has been fired from his job as an accountant in the Vatican’s main financial office and his accounts at the Vatican bank, known as the Institute for Religious Works, were frozen. His arrest precipitated the resignations of the bank’s top two managers and accelerated efforts to make the troubled institute conform to international anti-money-laundering norms.

Scarano’s initial arrest in the smuggling case was reduced to house arrest because of his ailing health. Sica said the new arrest warrant would be served under house arrest.