22 so far dead in Agusan del Sur floods, mudslides in past 2 weeks 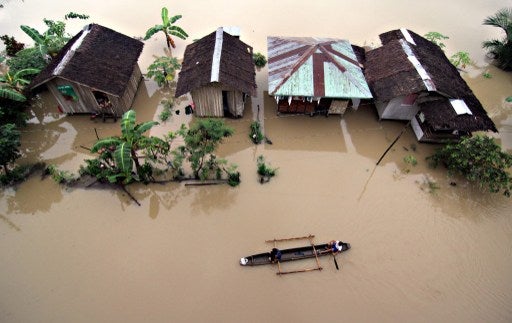 BUTUAN CITY, Philippines – Floods and mudslides spawned by nearly two weeks of relentless rains already claimed the lives of 22 people and displaced more than 50,000 families or 308,045 people in the five-province Caraga Region alone.

The latest fatality was identified as a certain Kakang Danago, who drowned Monday morning while trying to cross a raging creek in Barangay (village) Bugsokan here.

Liza Mazo, chief of the Office of Civil Defense in Caraga, said a fisherman from Surigao del Norte remained missing and 27 others have been injured.

Mazo said the floods and mudslides have battered some 308 villages from all five provinces of Caraga, the two Agusan and Surigao provinces and Dinagat.

Mazo said a total of 308,405 persons have been displaced and housed at 371 evacuations centers spread throughout the region.

She said the number of evacuees would likely rise because the rains have not stopped.

“The impact of flooding has gone beyond our anticipation. The number of affected families is rising,” Amante said.

Classes in all levels, work in both the public and the private sectors and air and seaport operations in and out of the city were suspended.

Water supply in most parts of Butuan was also cut off when the water service company turned off its pipes for fear dirt would seep into the water supply.

Surigao del Norte Gov. Sol Matugas said the island of Siargao and several towns in the mainland suffered power loss after the electric utility there shut off its supply due to strong winds.

She said she has ordered the suspension of classes in elementary, secondary and college levels throughout the province.

Suyo said remote villages in the upland towns of Las Nieves, and Carmen were already isolated.

“Our rescue teams are having difficulty reaching the villages due to strong river currents and deep of flood waters,” Soyo said.

As landslides hit, river tributaries and lakes overflowed, major road networks in the region, like the Surigao-Butuan Road and the Agusan–Davao Road were closed to traffic.

The Surigao-Davao Coastal Road was also closed to traffic after landslides hit in Barobo town in Surigao del Sur.

‘Agaton’ lingers; Signal No.1 still up in 6 areas