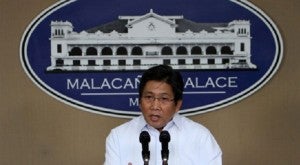 MANILA, Philippines – Monday’s national day of prayer for victims of calamities and crisis in 2013 only coincided with the anniversary of the 2001 political action that led to the ouster of former president Joseph Estrada, a Malacañang official said Sunday.

Communications Secretary Herminio Coloma Jr. said in an interview on DZRB that the prayer gathering has nothing to do with the commemoration of “Edsa Dos.”

He added that previous administrations do not celebrate the 2001 political action.

“Nagkataon po na ‘yon ang petsang napili para sa okasyon. (It just happened to be on the date of the National Day of Prayer),” he added.

Estrada won in the Manila mayoral race in 2013.

From Malacañang, President Benigno Aquino III will lead the interfaith gathering with the theme, “One Nation in Prayer (Isang Bansa, Isang Panalangin).”

The prayer gathering is intended to thank God for the resiliency of survivors of manmade and natural calamities last year – the Zamboanga city attack, the Bohol earthquake and Super Typhoon Yolanda that hit central Philippines.

The gathering will last 30 to 45 minutes and will be telecast live by television and radio stations in the country.

Invited to offer prayers are Antonio Cardinal Tagle of the Catholic Church, Police Superintendent Imam Ebra Moxsir of the Imam Council of the Philippines, Commissioner Zenaida Pawid of the National Commission on Indigenous Peoples, Isaias Samson of Iglesia ni Cristo and Bishop Jonel Milan of the Philippine Council of Evangelical Churches.

Also invited are leaders and members of Congress, government officials and representatives of civil society and various faith groups.