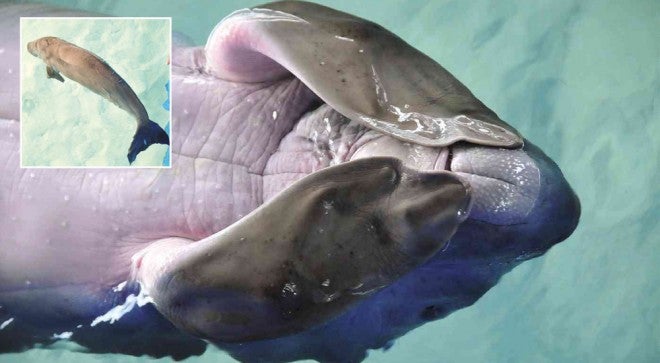 RESCUED BABY DUGONG ON ITS BACK. “Binu,” a sea cow found stranded at low tide in Binulasan village in Infanta, Quezon province, last week, is now with the Biodiversity Management Bureau, which intends to nurse it back to health with infant formula. The dugong (inset full body), a mammal, will be temporarily kept at Manila Ocean Park. CONTRIBUTED PHOTOS

MANILA, Philippines—The baby dugong rescued in Infanta town in Quezon won’t be released back to the wild anytime soon as wildlife authorities have judged its chances of survival to be slim without its mother.

The Biodiversity Management Bureau (BMB) of the Department of Environment and Natural Resources (DENR) has taken custody of the young male dugong, intending to nurse it back to health with infant formula and bring it to its ideal weight in the next critical six weeks.

BMB Director Theresa Mundita Lim announced in a briefing Thursday that the orphaned sea cow, which was found stranded at low tide on Jan. 9, would be temporarily reared in a facility at the Manila Ocean Park.

Officials have named the animal “Binu,” after “Binulasan,” the village where it was discovered.

The dugong, estimated at one to two months old, is being fed infant formula by animal handlers and will be weaned using sea grass, its natural diet in the wild, when it gains enough weight, according to Lim.

The 1.06-meter Binu is underweight at 18 kilograms, and caretakers hope to bring it to its ideal weight of 20 to 25 kilograms in the next six weeks.

But experts are not confident about the chances of Binu making it.

Marine mammal expert Arnel Andrew Yaptinchay, president and founder of the Marine Wildlife Watch of the Philippines, cited scientific literature stating that out of 30 neonate or nursling dugong rescued in the world, only about five had survived in captivity.

One is in Singapore, another in Japan, two are in Sydney and the fifth is in Indonesia, according to Yaptinchay.

Of the seven baby dugongs rescued in the Philippines since the early 1990s, none had survived, the BMB (formerly Protected Areas and Wildlife Bureau) said.

But Lim said her agency had learned plenty from its previous experiences attempting to care for dugong in captivity, and she hoped the knowledge would help ensure Binu’s survival.

“We will be watching it carefully in the next six months, and if it grows healthy in those six months, then we will prepare to release it in its natural habitat, which is what we all hope for,” she said.

Once the animal gains enough weight, arrangements would be made to transfer it to Infanta to “acclimatize” to its natural environment, according to Lim.

Marine turtle and dugong specialist Romy Trono, who used to be connected with the bureau, said the feeding and care of dugong would involve a lot of time, effort and money.

“The animal needs to be watched 24/7, and the sea grass has to be imported from abroad,” he said.

Locally called “duyong or baboy dagat,” the dugong, a critically endangered species, belongs to the animal group Sirenia. They are air-breathing marine mammals like dolphins and whales.

“They could not stay long underwater; they have to surface from the water to breathe. Since they could not swim fast, they are an easy target of poachers who hunt them with nets, dynamite or spear guns,” Lim said.

She has instructed local wildlife officers in Quezon to investigate what might have happened to Binu’s mother.