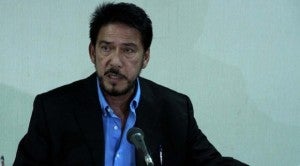 MANILA, Philippines—If the six people arrested in posh residences in Makati and Taguig cities were members of a Mexican drug cartel, then the military should join in the intelligence gathering.

Sen. Vicente Sotto III made this statement in a phone interview on Thursday, saying a confirmation of this report should involve the Intelligence Service of the Armed Forces of the Philippines (Isafp) in the National Bureau of Investigation and the Philippine Drug Enforcement Agency (PDEA) data gathering.

“If they’re members of a Mexican drug cartel, I’d start to worry. It’s a sign of danger. The authorities should step up their intelligence work. I suggest that the Isafp comes in,” he said.

The NBI arrested six people, including three Canadians, during raids on posh residences in Taguig and Makati cities last Wednesday on suspicion they were members of an international drug syndicate.

The agents seized methamphetamine hydrochloride, cocaine and ecstasy pills estimated at P100 million from The Luxe Residences and One Serendra in Taguig, and Gramercy Residence in Makati City.

Authorities are now investigating whether they are part of the Sinaloa drug cartel, Mexico’s biggest and deadliest drug network.

Sotto, former chair of the Dangerous Drugs Board, said he would be “optimistic” if the arrests involved trade of marijuana and shabu.

It would be a different story altogether if the Mexican drug cartel is now operating in the country, he said.

“The Hong Kong Triad pales in comparison with the drug cartel. This cartel targets the police chief,” he said. “The authorities should begin investigating if they’re operating in the Visayas and Mindanao.”

Police seized drugs from the Sinaloa drug cartel during a raid on a game fowl ranch in Batangas province on Dec. 25.

Sotto said that if the authorities established the arrested people’s links to the drug cartel, this would confirm intelligence information that syndicates from South America and West Africa were not only transiting through Manila, but also marketing drugs here.

This will be alarming, he said.

“This is a good process of screening the records of aliens who may be involved in illegal activities, particularly drugs,” she said in a text message.

Two of those arrested—Canadians Barry Espadilla and James Riach—are facing murder, weapons and drug charges in Canada, stumping officials how they managed to enter the country despite such records.