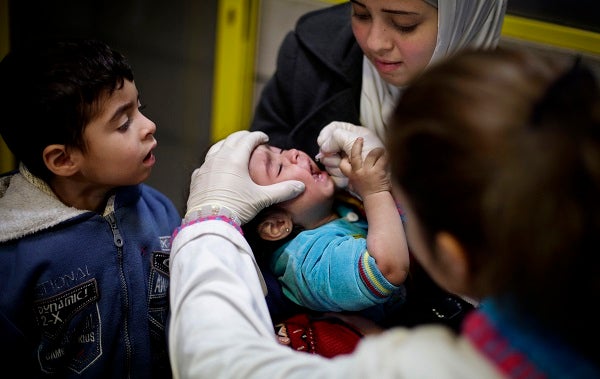 This Dec. 18, 2013 photo shows a Syrian boy watching as his baby sister, cradled by their mother, is given the polio vaccine by Unicef nurse Genivieve Bashalani, right, at the UN refugee agency’s registration center in Zahleh, in Lebanon’s Bekaa Valley. Around 245,000 Syrians are living in towns and cities under siege and facing extreme hardships, including food shortages, UN Emergency Relief Coordinator Valerie Amos said in Kuwait on Wednesday, Jan. 15, 2014. AP PHOTO/MAYA ALLERUZZO

She was speaking at a donor conference aimed at raising $6.5 billion (4.8 billion euros) for Syrians affected by the country’s conflict, which has killed more than 130,000 people since March 2011.

“I am deeply troubled by the persistent reports of people running out of food in those besieged communities, where some 245,000 people live,” Amos said.

“Children, women, men, are trapped, hungry, ill… (and) losing hope in the international community’s ability to help them,” she told the conference.

“Siege has become a weapon of war with thousands of people blockaded in their communities running out of supplies and unable to get basic services,” Amos said.

The conference’s $6.5 billion goal is the largest ever UN appeal and is aimed at helping the 13 million Syrians hit by three years of civil war.

Opposition groups are pressing their blockades of the towns of Nubul and Al-Zahraa in Aleppo province, while government forces are laying siege to the towns of Eastern Ghouta, Daraya and Moadamiyet al-Sham in rural Damascus, the Yarmuk Palestinian refugee camp near the capital and the old city of Homs, she said.

“Nearly every Syrian is affected by the crisis with a 45-percent drop in gross domestic product and a currency that has lost 80 percent of its value,” Amos said.

The UN official, who visited Damascus last week to assess the situation, said destruction of the infrastructure has put the most basic services at risk with water supplies down by half.

A commission of inquiry set up by the UN Human Rights Council found war crimes, crimes against humanity and gross human rights violations are committed in Syria on a daily basis, Amos said.

“All sides in the conflict have shown a total disregard for their responsibilities under the international humanitarian and human rights law.”

“The figure now stands at 9.3 million people in need—around the population of Chad, Sweden and Bolivia. Nearly 6.5 million people are internally displaced,” she added.