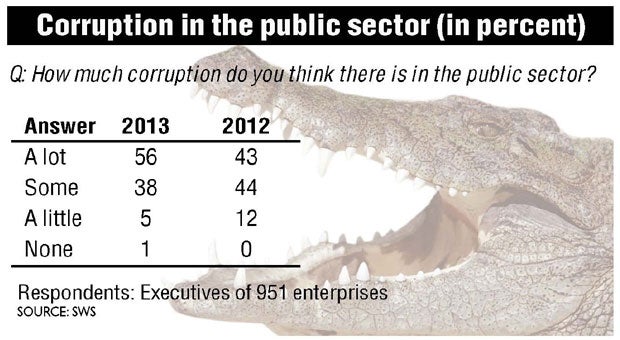 More than half of the executives from about 1,000 enterprises in Metro Manila and six other urban areas in the country said last year that there was “a lot” of corruption in government, a Social Weather Stations (SWS) survey has found.

Fifty-six percent of the businesspeople claimed seeing “a lot” of corruption in the public sector, a 30-percent increase from 43 percent in 2012, results of the 2013 SWS Survey of Enterprises on Corruption showed.

Despite this perception of widespread corruption by the executives, satisfaction with government efforts to promote a good business environment and business expectations for the next two years peaked in 2013.

The results were presented Wednesday at the three-day Good Governance Summit where President Aquino delivered the opening address.

“The field work of the survey was done during the height of the pork barrel scandal and discussion of the issue has influence on people’s perception,” said Vincent Lazatin, executive director of Transparency and Accountability Network.

An Inquirer series on the P10-billion pork barrel scam started in July 12 last year, enraging the public that led to a series of protests across the country, including the “One Million People March” on Aug. 26 at Manila’s Rizal Park, which called for the abolition of the Priority Development Assistance Fund (PDAF) and other forms of pork barrel.

Acting on several petitions, the Supreme Court ruled last November that the PDAF, a graft-ridden pork barrel of lawmakers, was unconstitutional.

The scam allegedly diverted the pork barrel of senators and members of the House of Representatives to bogus nongovernment organizations set up by businesswoman Janet Lim-Napoles.

Whistle-blowers led by Benhur Luy, a relative and former employee of Napoles, told Senate hearings last year that certain senators and House members received kickbacks of up to 50 percent of the PDAF that was supposed to finance projects, while Napoles got 40 percent and government conduits, 10 percent.

Based on the testimony of Luy and other whistle-blowers, the Department of Justice filed plunder and malversation charges against Senators Juan Ponce Enrile, Jinggoy Estrada and Ramon Revilla Jr., several former House members and Napoles in the Office of the Ombudsman last year.

Of the 26 state institutions that were rated for sincerity in fighting corruption, the Bureau of Customs was the sole agency with a “very bad” net sincerity rating at -63 from bad -46.

Lazatin said that historically, the Senate had negative net sincerity ratings except in 2012 when it got +36. “(The year) 2012 is an outlier and that could be because of the impeachment of Justice Renato Corona,” he said.

The Senate served as an impeachment court during the trial of Corona who was found to have not declared his dollar holdings in his statement of assets, liabilities and net worth, leading to his ouster.

Other agencies that got rating downgrades included the House of Representatives (neutral -6 to poor -28), Department of Education (very good + 51 to good +49), Department of the Interior and Local Government (good +30 to moderate +20), Department of Budget and Management (moderate +23 to neutral +9), Land Transportation Office (poor -26 to bad

The ratings of five agencies were upgraded—the Supreme Court (moderate +24 to good +36), Commission on Elections (poor -13 to neutral +7), Social Security System (good to very good), Department of Justice (neutral -5 to good +35) and Commission on Audit (neutral +8 to moderate +22)

Two agencies were rated for the first time this year—the Department of Social Welfare and Development [DSWD] (very good +52) and Department of Labor and Employment (good +43).

The survey also found that 38 percent of the executives of private firms said they had personal knowledge of public sector corruption in their sector in the last three months, an increase from a record-low 33 percent in 2012.

Thirty-five percent of the respondents said they had extensive knowledge and 57 percent had little knowledge of the administration’s anticorruption efforts.

The percentage of respondents saying government measures to eradicate corruption were effective dropped from 78 percent to 73 percent.

Only a fifth, or 20 percent, believed that the government often/almost always punished corrupt government officials, down from 27 percent in 2012.

According to the SWS, 42 percent said that “most/almost all” companies in their business sector had given bribes to win government contracts in 2013, practically unchanged from the record-low 41 percent in 2012.

Forty-four percent said they were solicited for bribes when getting local and national permits or licenses, paying income taxes, complying with import regulations, supplying government with goods and services, collecting receivables from government and availing themselves of government incentives.

Asked about the mixed results, Lazatin said that the extent of corruption was a “perception” fueled by the pork barrel scam and that the instances of bribery were experiential.

Sixty-seven percent said they were willing to pay twice as much for a double-period validity of a government license or permit, up from 63 percent in 2012.

If more information were available to the public, controversies such as the pork barrel scam would have been prevented, thus the need for an FOI law, according to Lazatin.

In transactions involving city governments, 77 percent said the procedures were “somewhat/definitely” transparent, up from 73 percent in 2009.

In the private sector, the fight against corruption is generally favorable while observations that “almost all” companies conduct honest business practices were flat, the SWS survey showed.

Despite the widespread perception of corruption in the public sector, entrepreneurs were satisfied with government efforts to promote a good business climate.

Satisfaction with the national government promoting a good business climate reached a record 70 percent, up from 69 percent. Those satisfied with the city government’s efforts rose to 67 percent from 64 percent.

Last year, a record 76 percent of respondents said business expectations for the next two years were excellent/good, a slight improvement from 74 percent in 2012.

The survey included executives of large enterprises, and small and medium enterprises, with 351 drawn from Metro Manila and 100 each from Metro Angeles, Cavite-Laguna-Batangas, Metro Iloilo, Metro Cebu, Metro Davao and Cagayan de Oro-Iligan.

The survey was conducted with support from Australian Aid-The Asia Foundation Partnership in the Philippines, in partnership with the National Competitiveness Council and Makati Business Club’s Integrity Initiative program.