Aquino: We govern based on facts, not on surveys | Inquirer News

Aquino: We govern based on facts, not on surveys 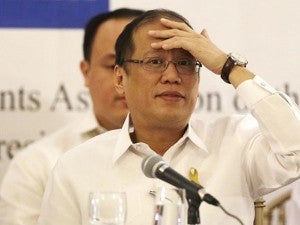 MANILA, Philippines—President Aquino on Tuesday blamed the sudden dip in his public approval ratings to demographics, claiming that many of the respondents in the latest Social Wealther Stations (SWS) survey may have been the victims of Supertyphoon “Yolanda” and other disasters this year.

Given these catastrophes, you can’t really expect this cross-section of the population to claim that their lives have improved, Aquino said.

At any rate, the President of the country does not “govern” based on surveys, he said.

“We govern based on… facts,” Aquino told reporters in Batangas City, where he led the groundbreaking rites for the 414-megawatt San Gabriel power plant.

He also stressed that self-rated hunger was not a “constant figure (but) varies.”

The SWS survey found that households rating themselves as poor stood at 55 percent, or 11.8 million households, five percent more than the last survey three months ago, while families who said they were “food poor” constituted 41 percent.

It had a sampling error margins of ±2.5 percent for national percentages, ±4 percent for Visayas, and ±6 percent for Metro Manila, Balance Luzon and Mindanao, said the SWS in a media posted on its website.

“The SWS survey questions about the family’s self-rated poverty and self-rated food-poverty are directed to the household head. These items are noncommissioned, and are always included on SWS’s own initiative and released as a public service, with first printing rights assigned to (a business paper),” the SWS explained on its website.

On self-rated poverty, respondents were asked: “Where would you place your family in this card?” The SWS then showed them a show card with the choices “not poor,” “on the line” and “poor.”

Aquino, commenting on the five percent increase the number rating themselves as poor, said that he had been told that many of the survey respondents were from the Visayas and Mindanao.

“Of course, they were affected during that period, which was after Yolanda,” he said.

“We all know the devastation (wrought by Yolanda), affecting 171 LGUs (local government units),” the President said.

“Nobody would say that,” the President said.

He also pointed out that the 11.8 million poor households were just “12 percent of the population.”

He urged the public to focus more on government’s interventions that were “long-term,” citing the conditional cash transfer program, which has been extended this year to cover subsidies for incoming high school students.

He said helping students from poor families finish secondary school was an example of “long-term intervention” because their income would increase by 40 percent.

“That (result) can’t be (measured) by current surveys,” he said.

“The capacity of every Filipino to move up with the economy will be bolstered, so that (growth) will really be inclusive. You give them skills to participate in the growth of the economy,” said Aquino.