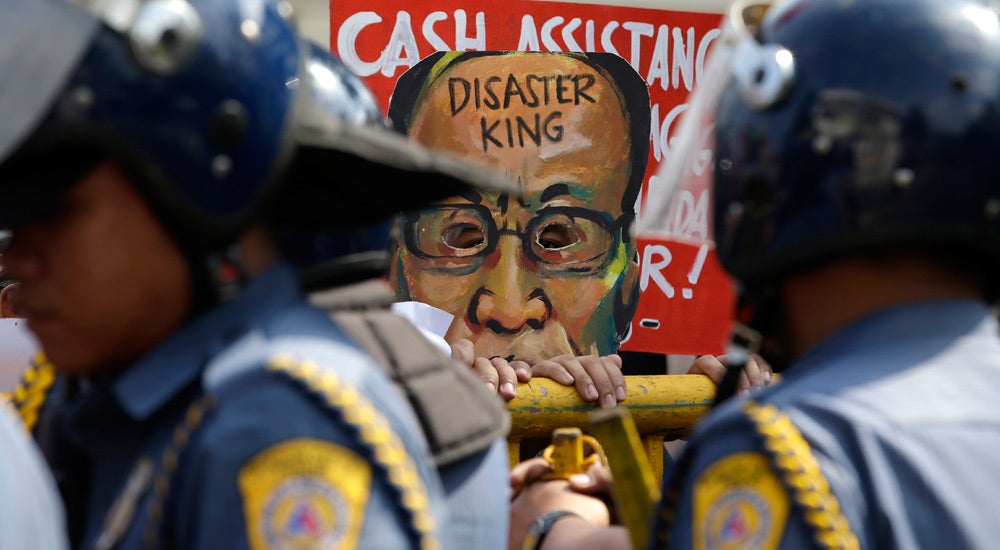 A protester wears a mask of President Aquino as they, some of them typhoon survivors, protest the alleged slow response by the government in the rehabilitation of the typhoon-stricken central Philippines on Jan. 8, 2014. Aquino’s performance rating dropped 6 percentage points in the Pulse Asia survey last month, amid widespread criticisms over his administration’s purportedly slow and inefficient response in the aftermath of Supertyphoon “Yolanda.” AP PHOTO/BULLIT MARQUEZ

But Malacañang opted to look at the bright side, saying that “3 out of every 4 Filipinos” remained behind the President, based on the survey, which had a margin of error of plus or minus 3 percentage points.

“In the aftermath of a series of calamities and the tremendous challenges arising from these, the President continues to enjoy the support of about three out of every four Filipinos,” Communications Secretary Herminio Coloma said in a statement.

The President’s performance rating stood at 73 percent, down from 79 percent in September. His trust rating declined to 74 percent from 76 percent.

In the same survey, Vice President Binay had an 80-percent performance rating and a 77-percent trust rating.

Chief Justice Maria Lourdes Sereno got a performance rating of 44 percent and a trust rating of 41 percent.

The survey was conducted last Dec. 8 to 15, a month after the monster typhoon battered Leyte, Samar, other parts of the Visayas and northern Palawan.

The typhoon attracted huge international aid for victims as well as overflowing criticisms that questioned the government’s preparedness in handling a calamity of this magnitude.

Aquino himself came under fire for claiming in a CNN interview that death toll was closer to “2,500” than the 10,000 estimate made by a police official, who was later sacked.

“Ten thousand, I think, is too much,” he told CNN’s Christiane Amanpour in an interview last November. 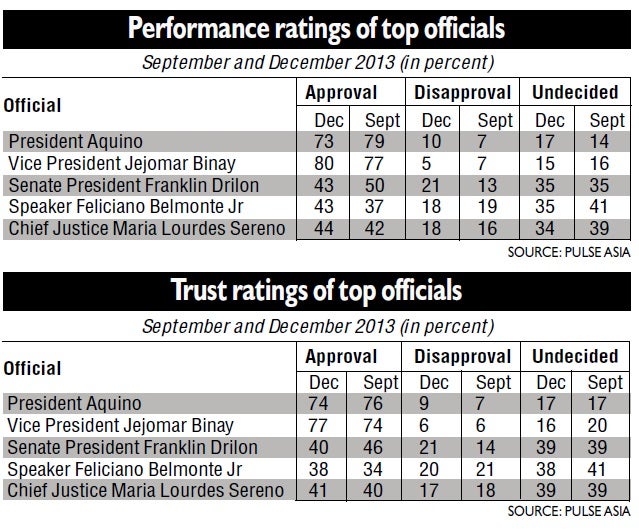 “There was emotional trauma involved with that particular estimate quoting both a police official and a local government official. They were too close to the incident. They didn’t have basis for it,” the President said.

As of early this month, the death toll stood at more than 6,100 with more than a thousand people still missing.

The government was also heavily criticized over some 1,400 bodies that remained unburied near Tacloban City, nearly two months after the typhoon.

The corpses were supposed to have been identified and given proper burial as of Monday last week.

Vice President Jejomar Binay thanked the Filipinos for his high performance score, saying it inspired him to work hard.

“I am grateful for the people’s sustained trust and appreciation for our work for the past three years. As we start the year, the result of the recent Pulse Asia survey is definitely a source of inspiration. Rest assured that we will continue to work hard to improve the lives of our people and provide them the service they deserve,” Binay said in a statement.

The Vice President chairs the Housing and Urban Development Coordinating Council and is a regarded as the country’s “housing czar.” He is also the presidential adviser on overseas Filipino workers.

Among the key government institutions, only the Supreme Court scored a majority approval rating of 52 percent, while the Senate and the House of Representatives earned approval ratings of 45 percent and 42 percent, respectively.

None of the key government institutions posted a majority trust rating, with the Supreme Court scoring 46 percent; the Senate, 42 percent; and the House, 39 percent.

However, Pulse Asia noted that the movement in Drilon’s approval, disapproval and distrust ratings were significant.

“At the national level, the only significant changes taking place during the period September to December 2013 are the decline in the approval score of Senate President Drilon (minus-7 percentage points), and the increase in his disapproval and distrust ratings (plus-8 and plus-7 points, respectively),” Pulse Asia said.

Drilon blamed the pork barrel scandal for the dip in his trust and approval ratings, but he vowed to work harder to regain public trust.

Some senators were implicated in the P10-billion pork barrel scandal that roiled Congress and the bureaucracy in the second half of 2013.

Three of them—Senators Jinggoy Estrada, Juan Ponce Enrile and Ramon Revilla Jr.—are facing a plunder complaint over the scam in the Office of the Ombudsman.

Others were not spared because of their association with Janet Lim-Napoles, who allegedly orchestrated the conversion of P10-billion pork barrel into kickbacks over 10 years beginning with the Arroyo administration.

“We realize and accept that the controversies that hounded Congress last year cost us the trust and approval of our people,” Drilon said in a statement.

He said the survey only challenged him to “improve our performance.”

“We have just entered a new year, but I am confident to say that with the reforms we have been undertaking and with the number of important pieces of legislation that the Senate will be working on this year, we will leave year 2014 with the trust and confidence of our people in the institution successfully restored,” he said.

In the face of public outrage over the misuse of public funds, Drilon and 14 other senators last year had their Priority Development Assistance Fund (PDAF) allocations deleted from the 2014 national budget.

The Supreme Court struck down late last year the PDAF as unconstitutional in the wake of the public outrage over the pork barrel scam.

Before adjourning for the holidays, Drilon vowed to lead the passage of key pieces of legislation this year, including the proposed Freedom of Information Act.

“We at the Senate are even more inspired and invigorated to heed the people’s call for genuine and lasting reforms and in passing legislation that will better serve the interests of the Filipino people, sustain economic growth, enhance government transparency and eliminate corruption,” he said.—With reports from Kate Pedroso, Inquirer Research; Jerome C. Aning and TJ A. Burgonio