Province opens window on its soul 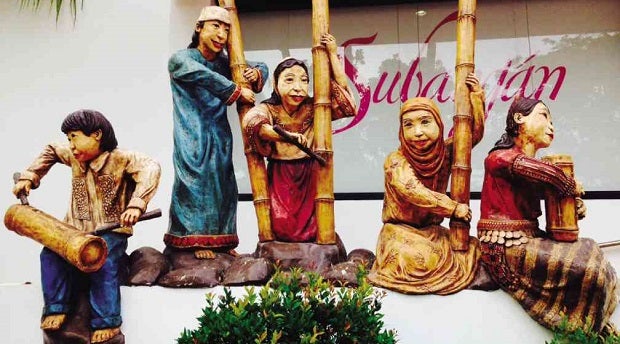 FIGURES representing the mixed population of Davao Oriental—“lumad,” Christians and Muslims—greet visitors at the entrance of the province’s newly opened museum. NICO ALCONABA

MATI CITY—The skeletal remains of Davor, the 53-foot sperm whale that was found dead on the shores of Governor Generoso town in 2011, greet visitors of the Subangan, the newly opened museum in the province of Davao Oriental.

The museum, a state-of-the-art building that houses not only Davor, a name given by Gov. Corazon Malanyaon, but also relics, fabrics, clothes and documents—practically everything that the province has to offer.

Inside is a room filled with photos taken during and after Typhoon “Pablo” devastated at least three coastal towns more than a year ago.

The calamity, Malanyaon said, delayed the completion of the building for a year as government “had to focus on relief and rehabilitation efforts” for the thousands of people displaced by the storm.

Admitting “constraints in resources,” the governor said she had the P25-million museum completed as this would serve as “the embodiment of the soul of the province.”

Subangan means the east, or where the sun rises.

For Malanyaon, the museum’s name could also mean hope for the people of Davao Oriental.

“This is something where people can draw strength from and make them proud of their heritage,” she said.

And Malanyaon was one proud governor when the museum was officially opened to the public on Jan. 8. She even served as a tour guide for those who attended the inauguration.

Subangan also boasts of the province’s tourist spots, like Mount Hamiguitan, which is shared by Mati City and the towns of San Isidro and Governor Generoso.

Mt. Hamiguitan, which is known for its rich flora and fauna, is home to the Bonsai Forest. It is expecting recognition as one of United Nations Educational, Scientific and Cultural Organization’s World Heritage  sites this year.

San Isidro town Councilor Apol Ruelo said he was impressed upon entering the Mt. Hamiguitan booth inside the 1,325 square-meter museum.

“There was this television set embedded on the floor. When you look at it, you see a body of water with fish on it. It’s like that up there,” said  Ruelo, who for several times had climbed Mt. Hamiguitan.

There was also a wide-screen TV showing the majestic Aliwagwag Falls in Cateel town, which was among the hardest-hit by Typhoon Pablo. Aliwagwag has since recovered from the wrath of the storm.

Malanyaon said the museum not only showcased the culture of the province, but also urged people to protect the enviroment “from the mountain to the sea, from ridges to reefs.”

It also features Dahican, the 7-kilometer white sand beach in Mati City, a sanctuary for sea turtles and a favorite site for skimboarders and surfers.

Sonny Boy “Bayogyog” Apordo, a resident of Dahican who won in the 6th International Skimboarding competition in Penang, Malaysia, in 2012, was among those who attended the inauguration.

“I’m happy I’m part of it,” he said as he stared at his photo skimming the waves of Dahican.

Arturo Boncato, tourism assistant secretary, said the museum was built by the provincial government “without much prodding.”

“The provincial government has done something sophisticated,” he said.

“People from all walks of life, rich or poor, can come together (in Subangan)” Boncato added.

For Malanyaon, now on her third and last term, Subangan will be her “legacy” as governor.