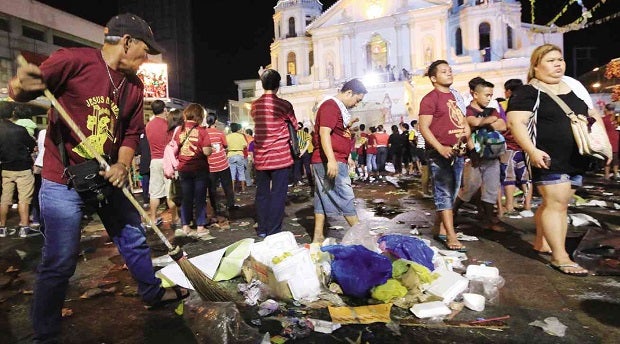 DESPITE pleas from environment advocates and local government officials not to toss their litter just anywhere, heaps of trash quickly piled up at the closing of the Black Nazarene procession in Quiapo, Manila, on Jan. 9, making this street sweeper’s job of cleaning up twice as difficult. ALEXIS CORPUZ

After mounting yet another mammoth procession, Black Nazarene devotees are increasingly gaining critics for the way some of them behaved during Mass and turned Manila into a “wasteland.”

The Jan. 9 “traslacion,” which drew an estimated three million people, ended around 2 a.m. the next day, taking 19 hours to parade the 17th Century image of the cross-bearing Christ through the city’s central district.

The Metropolitan Manila Development Authority (MMDA) on Friday said it collected 336 tons of garbage along the procession route from Quirino Grandstand to Quiapo Church.  The agency mobilized scores of street cleaners, starting with those deployed at the tail-end of the predominantly male crowd, who went to work as soon as the road was clear of devotees.

“We are deeply saddened by the way Quiapo turned into a dump due to the unimpeded disposal of garbage in the streets,” said Tin Vergara, a campaigner for the environmentalist group EcoWaste. 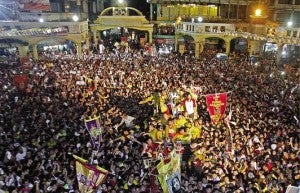 THE IMAGE of the Black Nazarene returns to its home in Quiapo Church 19 hours after it was carried by devotees in a tumultuous procession on Jan. 9 that snaked through most of the district’s narrow streets. ARNOLD ALMACEN

“The Quiapo collection is still going on so there should be more (than what the MMDA had reported),” EcoWaste leader Manny Calonzo added.

The drains on Quezon Boulevard were covered with trash, portions of Evangelista Street were strewn with burnt firecrackers, and the corner of Evangelista-Ronquillo Streets had a huge pile of stinking waste, EcoWaste also noted in a statement. “Past midnight, people were literally walking on garbage on Carriedo Street,” it added.

“The dirty streets of Quiapo do not (jibe with) Manila’s vision of making the feast of the Black Nazarene an international tourist attraction,” Vergara said, referring to a reported plan of the Manila Tourism and Cultural Affairs Bureau.

“We want our foreign visitors to bear witness to our people’s indomitable faith and remember the prayers and sacrifices of the ‘mamamasan’ (the group of laymen in charge of the image), not the inhospitable dumping of garbage on Quiapo streets. That is not the kind of publicity we want,” she said.

The devotees were also criticized for disrupting the early-morning Mass celebrated by Manila Archbishop Luis Antonio Cardinal Tagle before the start of the procession at Quirino Grandstand. After Tagle ended his homily, scores of male devotees broke through the police barrier and rushed the stage to seize the statue.

The devotees ignored pleas from Fr. Anton Pascual of Radyo Veritas to let Tagle finish the Mass. The cardinal and other priests later finished the service backstage.

“That is not genuine religion,” said Lagdameo, who watched the feast on TV. “All pushing and shoving, to each his own. More people could go near the Nazarene if they were disciplined.”

“Our devotees should be continuously catechized. Their faith should be deepened and enriched,” Cubao Bishop Honesto Ongtioco added.

But for the Quiapo Church rector, Msgr. Clemente Ignacio, this year’s traslacion was “generally successful and meaningful” despite the disrupted Mass.

Ignacio said the men who rushed the stage represented only a small percentage of the devotees who showed up for the procession.

“Ninety-eight to 99 percent were praying. And it doesn’t mean the devotees (who stopped the Mass) have not been praying. We cannot judge them,” he said.