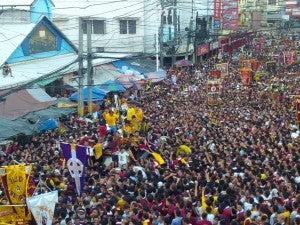 MANILA—As in past observances of the feast of the Black Nazarene, Manila’s Quiapo district turned into a virtual wasteland in the wake of the kilometers-long procession by millions of devotee on Thursday, pollution watchdog EcoWaste Coalition lamented Friday.

“We are deeply saddened by the way Quiapo turned into a dump due to the unimpeded disposal of garbage in the streets,” said Tin Vergara, zero waste campaigner of EcoWaste.

“Styrofoam containers for meals given to the devotees were found abandoned in street gutters and lamp posts and under parked vehicles,” EcoWaste said.

“The clogged storm drains along Quezon Boulevard were covered with trash, while portions of Evangelista Street were strewn with burnt firecrackers and at the corner of Evangelista-Ronquillo Streets was a huge pile of stinking waste,” it added.

“By past midnight, people were literally walking on garbage on Carriedo Street,” the group said.

A report by the state-run Philippine News Agency on Friday said at least 28 truckloads, or 336 tons, of garbage were collected by the Metro Manila Development Authority a day after the procession.
Francis Martinez, MMDA Metro Parkway Clearing Group head, said that since the start of the procession from the Quirino Grandstand to Quiapo Church, they had already gathered 23 truckloads, or 276 tons, of garbage.

Fire trucks also began spraying water on the road to eliminate the stench and remnants of trash left by the devotees.

“The dirty streets of Quiapo do not befit Manila’s vision of making the feast of Black Nazarene as an international tourist attraction,” the group said.

The group noted the earlier announcement of the Manila Tourism and Cultural Affairs Bureau that the religious celebration would be referred to as the “International Pilgrimage of the Black Nazarene” beginning in 2015.

“We want our foreign visitors to bear witness to our people’s indomitable faith and remember the prayers and sacrifices of the ‘mamamasan,’ not the inhospitable dumping of garbage in Quiapo streets. That is not the kind of publicity we want,” the EcoWaste statement said.

EcoWaste said the feast of the Black Nazarene and similar festivities should not be exempt from abiding by the country’s basic environmental laws, particularly those under Republic Act 9003, or the Ecological Solid Waste Management Act.

That law specifically prohibits “the littering, throwing and dumping of waste matters in roads, sidewalks, canals, esteros, parks and other public places,” the group said.

Under the law, violators shall be fined P300 to P1,000 and/or obliged to render community service in the city or town where the offense was committed. With a report by Julliane Love de Jesus, INQUIRER.net