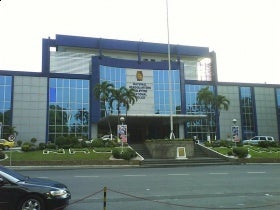 Irony of ironies. The country’s biggest law enforcement group, with tens of thousands of firearms in its armories, is hiring security guards to protect its official home from intruders.

The Philippine National Police  has allocated P21 million to hire the services of security guards to man the gates and offices of Camp Crame, its national headquarters located at Quezon City.

“The plan to have security guards detailed at Camp Crame gates will be implemented soon,” Purisima told reporters at the traditional “New Year’s Call” at Camp Crame on Wednesday.

“They will replace our policemen who will be deployed on the streets,” Purisima said. “The funds for that are already included in this year’s approved budget.”

About 100 members of the Headquarters Support Unit (HSS) are currently assigned to secure the three main gates of Camp Crame.

They also guard the main building of the camp, which houses Purisima’s office and other offices of senior PNP officials.

With about 150,000 armed personnel, the PNP is the country’s biggest security force. It has more personnel than the 120,000-strong Armed Forces of the Philippines (AFP).

To boost its firepower, the PNP recently completed the acquisition of 78,722 units of Glock 17 Generation 4 pistols worth nearly P2 billion.

The procurement of the 9mm pistols filled up the PNP’s requirement for handguns.

Purisima said that the PNP would also buy P200 million worth of long firearms within the year.

Razon had said the project to hire private guards was part of the PNP’s anticriminality program by boosting police presence in the streets.

Razon is now detained at the PNP Custodial Center in connection with graft charges.

In February last year, the HSS held a dry-run of the project. Twenty-one security guards were assigned at Gate 2 of Camp Crame along Santolan Road in three eight-hour shifts.

The PNP said it could actually save money by employing security guards, noting that a PNP employee with a rank of Police Officer 1 receives around P18,000 just to perform guard duties.

Petty crimes still occur within the 30-hectare Camp Crame despite its being one of the most secured places in the country.

Last week, a police official lost his bicycle outside his quarters inside the camp.

A similar incident also happened in front of the Highway Patrol Group headquarters, according to the HSS commander, Chief Supt. Samuel Yordan.