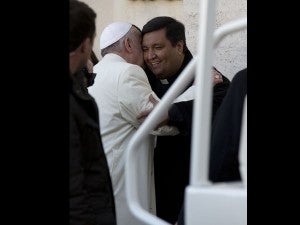 Pope Francis greets Rev. Fabian Baez, at the end of his weekly general audience in St. Peter’s Square at the Vatican, Wednesday, Jan. 8, 2014. Pope Francis has broken with papal protocol once again, inviting his friend Rev. Fabian Baez, a priest from Francis’ hometown in Buenos Aires, for a spin on his popemobile. AP

VATICAN CITY – Pope Francis broke with papal protocol once again Wednesday, inviting an old friend for a spin in his panoramic white car during his weekly general audience in St. Peter’s Square.

The Rev. Fabian Baez, a parish priest in Francis’ hometown of Buenos Aires, didn’t have a VIP ticket granting him a seat close to the altar or a spot where the pope would chat with well-wishers. But as soon as Francis saw Baez in the crowd of several thousand people, the pope signaled for Vatican gendarmes to help Baez jump the barricade.

Francis then invited Baez to hop aboard his car, and the parish priest accompanied Francis through the square as the pope waved to well-wishers and kissed babies.

Baez said he was shocked by Francis’ invitation, telling reporters afterward: “I said to myself ‘What am I doing here? Mamma mia!'”

“The pope laughed and said ‘Come, sit down, sit down!’ And he continued to greet the people and kiss babies. I was very moved.”

Baez said the two had known each other since the 1990s; the former Jorge Mario Bergoglio was archbishop of the Argentine capital before being named pope.

Francis was in particularly good spirits at Wednesday’s audience, entertained by a circus troupe and greeted by Italy’s Sampdoria soccer team, who presented the soccer-mad pope with yet another jersey.

Francis has added a bit of spontaneity to the Vatican’s staid ways. He lives in the Vatican hotel, not the Apostolic Palace. He eschewed the armored popemobile for a simple Fiat during his trip to Brazil. And when he has left the Vatican, he has done so with a minimal security detail and no fancy motorcade.