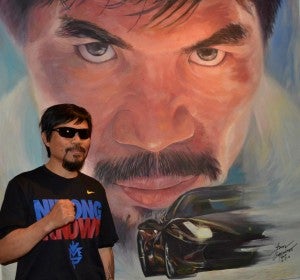 When the day came on Nov. 29, fans cheered, mobbed and posed for photographs with a man they believed to be Pacquiao, as his escorts composed of local officials led by Board Member Efren Quiben took him around to various events in Dupax del Norte, Dupax del Sur and Diadi towns.

It was only last week—more than a month later—that local officials disclosed that Novo Vizcayanos had actually played host to a Pacquiao look-alike identified as Ulysses Abenojar, who happened to be related to Quiben’s wife.

Documents showed the provincial government’s black Hyundai Starex Limousine was used to “ferry Manny Pacquiao” around the province, using up P1,850 worth of diesel fuel.

Records also showed the trip ticket for the “Pacquiao” visit was approved by Board Member Maybelle Blossom Sevillena, who would later blow the whistle on the incident in a letter she wrote to then acting (now vice) governor Epifanio Galima Jr.

“The information [about the supposed Pacquiao visit] came to [me] as a surprise considering that there was no known activity… wherein the presence of Congressman Manny Pacquiao was requested,” Sevillana wrote.

Sources in the provincial government said the request for Pacquiao was made by Quiben, who was hosting the look-alike.

In an interview on Monday, Quiben confirmed that he accompanied Abenojar to various events in the province on Nov. 29, but the visit was not intended to fool the people.

Abenojar was meant “to provide some entertainment,” he said, adding that although people “at first mistook him (for) Manny Pacquiao… we made it clear afterwards that he was actually just a look-alike.”

Quiben said Abenojar had been appearing at fight venues abroad where he would draw crowds with his strong resemblance to the boxing champ.

The Canada resident was in the country at the time to fix his birth records in Bambang, where he was born and grew up.—Melvin Gascon