Nazareno procession to take longer due to revised route 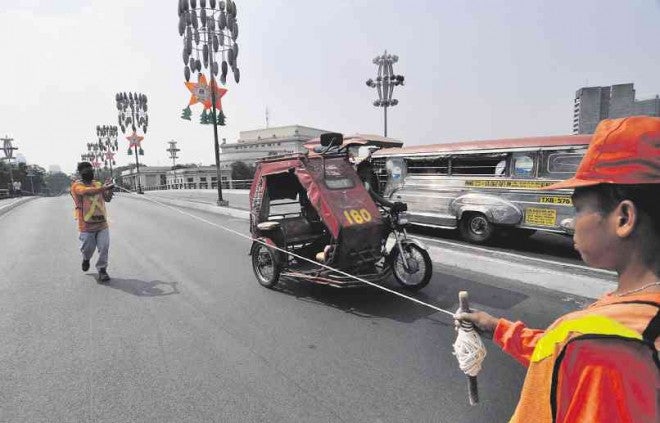 Department of Public Works and Highways personnel conduct minor repairs on MacArthur Bridge where cracks have been found on the underside of the aging structure. The finding prompted church officials to change the procession route to ensure the safety of devotees. RICHARD A. REYES

The feast of the Black Nazarene’s grand procession on Thursday may take two to three hours longer than usual after officials decided to make minor changes in the route.

This was the estimate of Quiapo Church rector Msgr. Clemente Ignacio who announced on Monday that the traslacion—the transfer of the Black Nazarene image from Quirino Grandstand in Rizal Park to Quiapo Church—would no longer include MacArthur Bridge due to safety concerns.

The Department of Public Works and Highways (DPWH) earlier called on church and Manila officials to regulate foot traffic on the old bridge after cracks were found on the structure.

Instead of MacArthur Bridge, the procession would pass through Jones Bridge instead, Ignacio said.

“The procession will cross Jones Bridge, take Escolta Street and then go back to the [old] route going to Feati [University] and then go straight to Villalobos Street,” he told reporters at a press briefing attended by Manila Mayor Joseph Estrada, Metropolitan Manila Development Authority Chair Francis Tolentino and officials of other agencies involved in preparations for the feast day.

“This is just a slight change from tradition. We are after everyone’s safety,” Ignacio said although he voiced certainty that the revised route would be welcomed by devotees.

“For the devotees, the longer the procession, the better,” he added.

In a phone interview, Public Works Undersecretary Romeo Momo said a DPWH team found cracks on the underside of MacArthur Bridge during an inspection on Sept. 30.

Momo said the cracks were certain to affect the structure’s foundation as he pointed out that Jones Bridge was much safer to use for the procession.

Following the findings, the DPWH has hired a consulting firm to do a detailed engineering study of the bridge. Once the results come out, a bidding for the renovation could be held followed by the retrofitting of the structure in the middle of the year, he added.

Fr. Ric Valencia, parochial vicar of Quiapo Church, noted that authorities have estimated a 15 to 20 percent hike in the number of devotees expected to join the procession this year. Last year’s participants were pegged at 9.6 million.

“We have indicators based on the number of churchgoers on Christmas, New Year and the first Friday of the month,” Valencia said.

He explained that the number of devotees has increased through the years, attributing it to the successive tragedies that struck the country. “These things raise our awareness that we need help from the One above us,” Valencia said.

The celebration on Jan. 9 will start with a 6 a.m. Mass officiated by Manila Archbishop Luis Antonio Cardinal Tagle at the Quirino Grandstand in Rizal Park followed by the traslacion.

He admitted that one of their concerns was the possible collapse of MacArthur Bridge due to the sheer number of devotees expected to take part in the traslacion.

“But now that the procession has been rerouted to Jones Bridge, one of our major concerns and problems has already been given solution,” Del Rosario said during the briefing.

He added that government agencies would be ready to help the city government and Quiapo Church officials in ensuring that there would be no accidents or untoward incidents during the feast day.

Barricades to be put up

Vice Mayor Francisco “Isko Moreno” Domagoso announced that the city government would put up barricades and position people along the revised route to guide devotees.

“We ask the people who will be joining the annual celebration on Thursday to bear with this simple diversion in the procession as this was done to ensure their safety,” Moreno said.

Estrada, on the other hand, said that vendors positioned on the route would be driven away while the city engineering office would carry out minor repairs on some city roads.

Two weeks before Christmas, damaged roads were patched up while missing manhole covers were put in place on the procession route, the DPWH reported.

“The MPD will deploy as many police officers as it can to maintain peace and order during Thursday’s celebration,” Genabe said.

At the same time, National Capital Region Police Office (NCRPO) chief Director Carmelo Valmoria said that they were still considering whether or not they would jam cell phone signals during the procession.

“Last year, blocking cell signals was one of the safety measures requested as there were threats to the peace and order of the event,” he added.

He noted, however, that even police officers were themselves affected by the move.

“We had a hard time communicating with each other during last year’s procession so now we are studying if cell signals should still be blocked or if this measure is no [longer] necessary,” the NCRPO chief said.