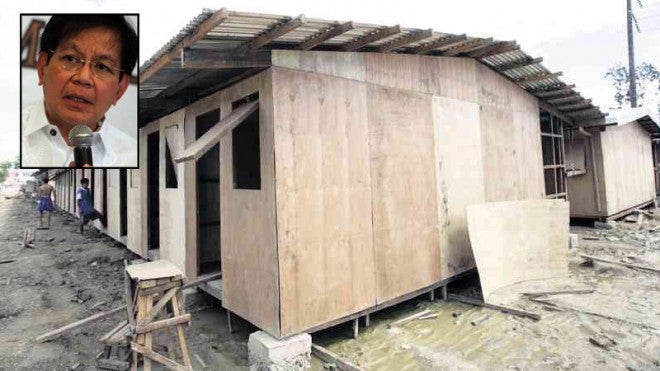 Rehabilitation chief Panfilo Lacson (inset) has begun investigating reports of a possible “collusion” between contractors and “at least one politician” to pocket kickbacks of 30 to 35 percent in the construction of bunkhouses (shown in photo) for victims of Supertyphoon “Yolanda” in Leyte and Samar. PHOTO OF LACSON FROM INQUIRER FILE/PHOTO OF BUNKHOUSES BY NIÑO JESUS ORBETA

Rehabilitation chief Panfilo Lacson has begun investigating reports of a possible “collusion” between contractors and “at least one politician” to pocket kickbacks of 30 to 35 percent in the construction of bunkhouses for victims of Supertyphoon “Yolanda” in Leyte and Samar.

Lacson, a former senator and Philippine National Police chief, has tapped the PNP Criminal Investigation and Detection Group to help gather evidence in the investigation he “quietly” initiated last Dec. 13 during his first visit in the affected areas.

“Thereafter, I received information and allegations of possible anomalies and kickbacks involving at least one politician in the area colluding with contractors,” he told the Inquirer in a text message. “They talked of 30 to 35 percent commissions.”

Lacson declined to elaborate on the politician, insisting he wanted “to be color blind all the way until I’m done with my rehabilitation job.”

He said charges would be filed in the Office of the Ombudsman “once we gather sufficient evidence to warrant a formal investigation.”

“We offer no second chance [for] people who cannot distinguish anymore between ordinary and extraordinary corruption,” Lacson added. “There’s a word to describe that kind of a person—amoral.”

Public Works Secretary Rogelio Singson on Monday promised to resign if the bunkhouses were found overpriced. He was reacting to an Inquirer report based on interviews with local officials and government engineers.

“It is not overpriced. If it’s overpriced, I will submit the following day my resignation to President Aquino,” declared Singson, who joined the regular Malacañang press briefing to address the allegation.

He expressed doubt about the report that Lacson said he had received of alleged kickbacks of 30 to 35 percent, noting that many of the contractors got on board as “part of their humanitarian efforts.”

“I don’t know where that came from,” he said in Filipino, referring to the report on the purported commission.

Singson noted that contractors had removed their “overhead and profit margins,” which were about “13 to 15 percent” of the project cost.

“Where will the contractor get the 30 to 35 percent that he will distribute? He is already helping, and he will still be bitten? If I were the contractor, why will I go there?” Singson said.

Still, Singson said he spoke with Lacson Monday morning and promised to address “specific” concerns raised by the rehabilitation chief.

He said Lacson had told him that the report on the alleged kickback came from a “particular municipality in Samar.”

A 15-page report of an international shelter group, the Camp Coordination and Camp Management (CCCM), said the bunkhouses did not meet international standards. The CCCM operates in countries torn by civil conflicts and natural disasters.

Lacson said he had secured “documents pertaining to the programs of work, bills of materials and specifications as well as the CCCM observations and recommendations.”

He said he was still awaiting documents from the Department of Public Works and Highways (DPWH) for comparison.

Singson said he had been told by Lacson about complaints of “substandard” materials allegedly being used for the bunkhouses.

He sought to distinguish between “overpriced” construction and that which did not follow “specifications” set by the DPWH.

“Overpriced means that there are specifications detailed, given by DPWH and the unit prices of these bunkhouses are above what normally would be in the market place—I can tell you there’s no overpricing here,” Singson said.

“Second, there might be possibilities that some of the contractors may have not followed the specifications and therefore we refer to them as underspecs,” he added.

“If contractors did not follow specifications that we gave them, they will not be paid unless they correct or rectify to meet our standards,” he warned.

“In some instances, I imagine, rather than retrofitting, because most of them have already mobilized, they will probably just donate some of these units rather than spend more.”

Singson said the DPWH had completed 126 of the target 222 bunkhouses. But he said construction was suspended to allow the government to address concerns raised by international agencies and adjust specifications to meet international standards.

The original bunkhouse design was supposed to include 24 units for as many families with three to four members each. Each unit had an area of 8.64 square meters (sqm).

The new bunkhouses would now have only 12 families each, meaning they would enjoy a bigger unit of 17.28 sqm.

“The comments coming from international agencies are that the one-room unit is too tight so we have made adjustments,” Singson said. “That is already acceptable [under] international standards.”

But the adjustments would mean that the construction period would be extended by one to two months for all 222 bunkhouses, he said.

“There are many experts coming from abroad saying [their] own piece—some of them about water, sanitation … All experts are on ground,” he said.

“I have met at least 10 from different UN [United Nations] organizations giving their suggestions and so we’re adapting. We’ve been constructing bunkhouses long before they arrived,” he said.

Considering the extent of the devastation wrought by Yolanda (international name: Haiyan), Singson admitted the government’s shelter program could not be completed in two years.

“Nobody claimed that it can be finished in two years. I’m not claiming I can finish the shelter program in two years. We are telling you it cannot be done in two years with this scale of the devastation there,” he said.