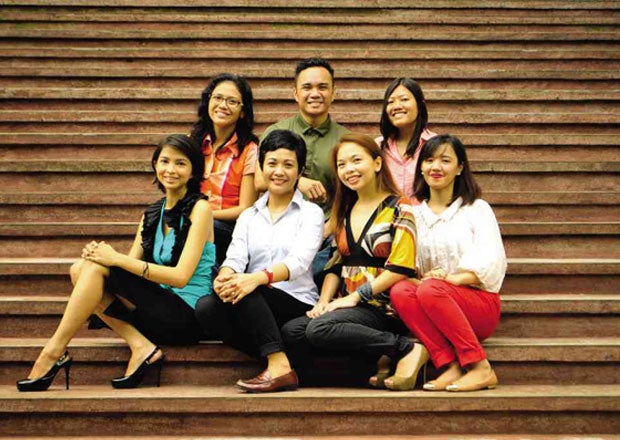 “Most people are not apathetic, only uninformed,” says University of the Philippines alumna Sheena Jamora.

When UP Manila student Kristel Tejada needed P10,000 for tuition and her loan application was denied, the 16-year-old freshman reportedly succumbed to despair and committed suicide.

“I’m in the wrong place. I can do more in my country,” Jamora recalls thinking upon hearing of Tejada’s tragic death in March. She had been working as a teacher in Japan and also happened to be a volunteer suicide counselor at Tokyo English Life Line (TELL).

Upon her return to the Philippines, she founded Sinag with six fellow UP Diliman alumni. The organization aims to help financially strapped students through microfinance, “Sinag” is Filipino for “ray of light.”

It is the group’s aspiration to make Sinag “a building block to a more luminous future” for students in need.

That gave Jamora the idea to connect struggling Filipino students with possible donors and lenders from around the world.

Through Sinag’s microfunding website, those interested in extending loans or donating can visit www.sinag.org, click “Fund Now” and type “give” or “lend” on the “purpose” field.

So far, contributions to the student loan fund have amounted to P20,000.

On its own, the Sinag team, composed of young professionals in their late 20s, has shelled out almost P100,000 to start operations.

On its first year, Sinag was able to lend P10,000 each to five UP Diliman students.

Jamora says of Sinag’s founders, “I have known them since elementary and high school at UP Integrated School (UPIS). Our teachers at UPIS inculcated [in us] the value of giving back to the country. They always reminded us that we owe our education to the taxpayers.”

Sinag is their way of giving back.

Students granted loans can pay in monthly installments. They can miss payments as long as they repay the whole amount within five months, Jamora says.

If a student is unable to return the money within that period, the university professor who has guaranteed the loan, will have to pay the full amount.

The signature of a professor as guarantor is needed before the loan is released. In the guarantor form, the professor indicates his/her agreement to support the student.

Jamora says they also plan to help students find part-time jobs so they can be self-supporting.

Sinag beneficiaries automatically become members of the organization. As long as they maintain a “good repayment behavior,” they can qualify for subsequent loans until graduation.

Although loans are interest-free, Jamora says they may charge a late payment penalty soon to encourage borrowers to pay on time.

“We will consult them about the penalty [but] it will be small. We just want to engender a sense of responsibility,” she says.

Once their operation becomes sustainable, Jamora says, they plan to extend the repayment period from five to 12 months and cover the full tuition of students.

Sinag is set up as a microfinance operation, a financial service that allows small entrepreneurs to borrow capital for start-ups. “But instead of entrepreneurs, we offer the loan to students,” says Jamora, who is a businessman’s daughter.

“I am hesitant about charity,” Jamora says, as it is a one-time deal while the “cycle of giving” never ends in microfinance.

“When borrowers pay, they are able to help a new batch of students,” she says. Payments are plowed back into the student loan fund. As the fund grows, more students can avail of an educational loan.

The first Sinag borrowers have been chosen based on financial situation, motivation to graduate, ambition and commitment to repay the loan.

Most of them have been referred by professors, except Neriah “BJ” Ato, who e-mailed a letter of application.

Ato, a computer engineering senior, still owes UP’s Office of Scholarships and Student Services (OSSS), Jamora says. He would not have been able to pay his tuition for the second semester without the Sinag loan.

Ato expects to graduate in October. He hopes to help his family and dreams of setting up his own technology company.

Davila was confident he would fall under Bracket E in the UP’s socialized tuition scheme. But the Isabela farmer’s son was placed in Bracket C.

Those in Bracket C pay only P600 per unit or P9,000 for five subjects excluding miscellaneous fees. But those in Bracket E do not have to pay tuition and other fees.

The STFAP bracketing system is “not foolproof,” Jamora says. Sinag caters to students in Brackets B, C and D whose families may not be earning enough to pay the required fees, she says.

Sinag aims to help at least 100 students in three years and have branches in other UP campuses and at state universities.

Stressing that she and her friends cannot sustain Sinag by themselves, she is appealing for donations to keep their project going.