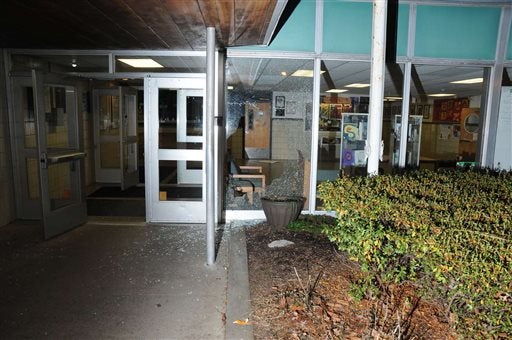 This December 2012 photo released by the Connecticut State Police on Friday, Dec. 27, 2013, shows a shattered window at Sandy Hook Elementary School in Newtown, Conn. Adam Lanza gunned down 20 first-graders and six educators with a semi-automatic rifle at the school on Dec. 14, 2012, after killing his mother inside their home. Lanza committed suicide with a handgun as police arrived at the school. AP

The rules come on top of a series of executive actions President Barack Obama announced after the Newtown, Connecticut school shooting that left 20 young children and six staff dead in December 2012.

The massacre relaunched a push for gun control laws in America and a handful of states have since tightened gun rules.

But the national measures Obama sought, including a plan for enhanced background checks on gun buyers and a ban on assault-style rifles, failed in the US Senate in April due to fierce opposition from gun rights supporters.

The figure is a 23 percent increase from the number of records that federal agencies had made available by the end of January 2013.

Under the new rules proposed by the departments of Justice and Health and Human Services, the federal background check database would be able to access some mental health records, due to an exemption to existing privacy law.

The Justice Department is also proposing to “clarify” that people involuntarily held at inpatient and outpatient institutions should be barred from buying guns.

“Too many Americans have been severely injured or lost their lives as a result of gun violence,” the White House said.

“While the vast majority of Americans who experience a mental illness are not violent, in some cases when persons with a mental illness do not receive the treatment they need, the result can be tragedies.”

The White House renewed its call for congressional action, including expanding background checks and making gun trafficking a federal crime.

“Passing common-sense gun safety legislation… remains the most important step we can take to reduce gun violence,” it said.

“The vast majority of Americans support these critical measures, which would protect our children and our communities without infringing on anyone’s Second Amendment rights (to keep and bear arms).”

Despite the effort, background checks are not required for the many private purchases that take place outside of licensed gun dealers, such as online or at gun shows.

In a stark reminder of guns in America, a man shot 12 people dead at a US Navy facility a few miles (kilometers) from the White House in September.