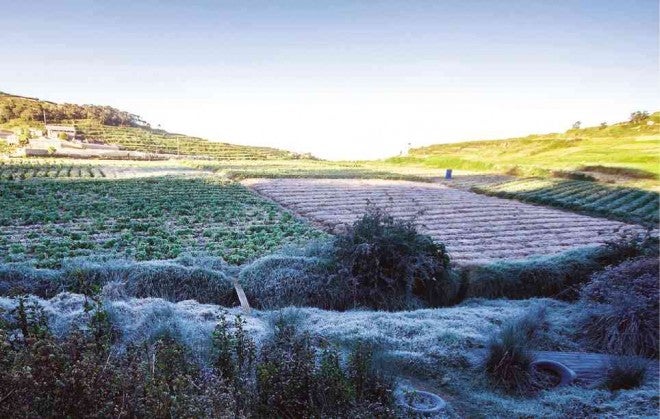 FROST has blanketed sections of Atok town in Benguet province once again, but it’s a seasonal phenomenon for which most vegetable farmers are prepared. Atok and other upland towns become far colder than Baguio City between December to February each year. GLADYS MAXIMO/CONTRIBUTOR

ATOK, Benguet—A blanket of frost covered some of this town’s farms on Thursday but local officials allayed fears that this would have an impact on the supply and prices of vegetables in Benguet province.

Mayor Peter Alos said farmers had completed most of the season’s harvests, so any perceived damage in Barangay Paoay here due to frost would not hurt the supply. The farms of Atok and other Benguet towns supply 90 percent of Metro Manila’s daily salad vegetable demand.

“The affected area [in Sitio Engladad, Barangay Paoay] was less than a hectare,” Alos said. “Some wombok (Chinese cabbage) were covered with frost but [the cold] affected only the outer [cabbage] leaves and not the whole crop,” he said.

Murphy Wagayan, a farmer, said he lost all of his potatoes to frost, which he planted on 2,500 square meters of his farmland.

Alos said frost always strikes a section of Sitio Engladad between December and February, which are the coldest months for the upland Cordillera provinces and Baguio City, when temperatures would drop to 11 degrees Celsius or lower.

Wagayan’s plantation is located near a river, so a drop in temperature freezes water collecting around the leaves of plants there, including grass, Alos said.

Wagayan said he expected the frost to affect Atok farms. “I knew [planting potatoes at this period] was a gamble. My potatoes would have been due for harvest next month (February),” he said.

Atok produces an average of 100,000 tons of assorted crops each season, records from the Benguet provincial agriculture office showed. The Department of Agriculture said over 6,000 hectares were devoted to vegetable farming.

Alos said the recent frost might have damaged potatoes but the annual drop in temperature rarely affects carrots, the town’s biggest moneymaker.

Atok is host to the highest point in the Philippine highway system (the highest point of Halsema Highway is 2,255 meters above sea level), which explains why it has colder weather than Baguio.